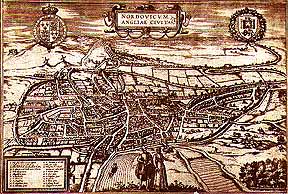 r download GoogleEarth and ask it to show you Norwich, U.K., and zoom in until you are walking down Rouen Road and Julian's Alley to the Music House (Isaac's House) on King Street, continuing on to where King Street and Rouen Road join, keep going past the ruined medieval wall until you can go no further, then turn left until you come to the Unilever security entrance, and there make an appointment to see what Jeremiah Coleman called 'Carrow Abbey', really Julian's Carrow Priory, which they came to own. My family, the Quaker Glorneys in Ireland, sold him the mustard secret and monopoly, which they had obtained from marrying into French royalty who were escaping the Revolution. The other Quaker branches of my family, in England this time, were Fry (a relative, Norwich's Elizabeth Fry) and Cash.

From both St Julian's Church and from Carrow Abbey one can see how the city is divided between Castle and Cathedral, glimpsing both imposing structures. See also Adam Easton's schoolboy drawings of how to measure the height of these. 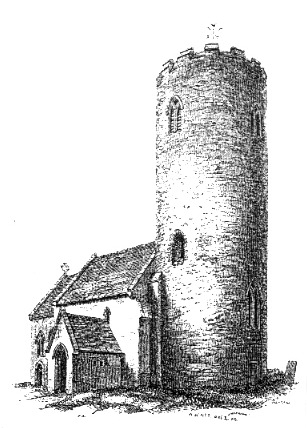 From an old engraving of St Julian's Church with its tower as it was was before WWII bombing.

http://www.the-plunketts.freeserve.co.uk§ give fine pre- and post-war photograph albums of Norwich created by George Plunkett, in particular of St Julian's Church and Carrow Priory. 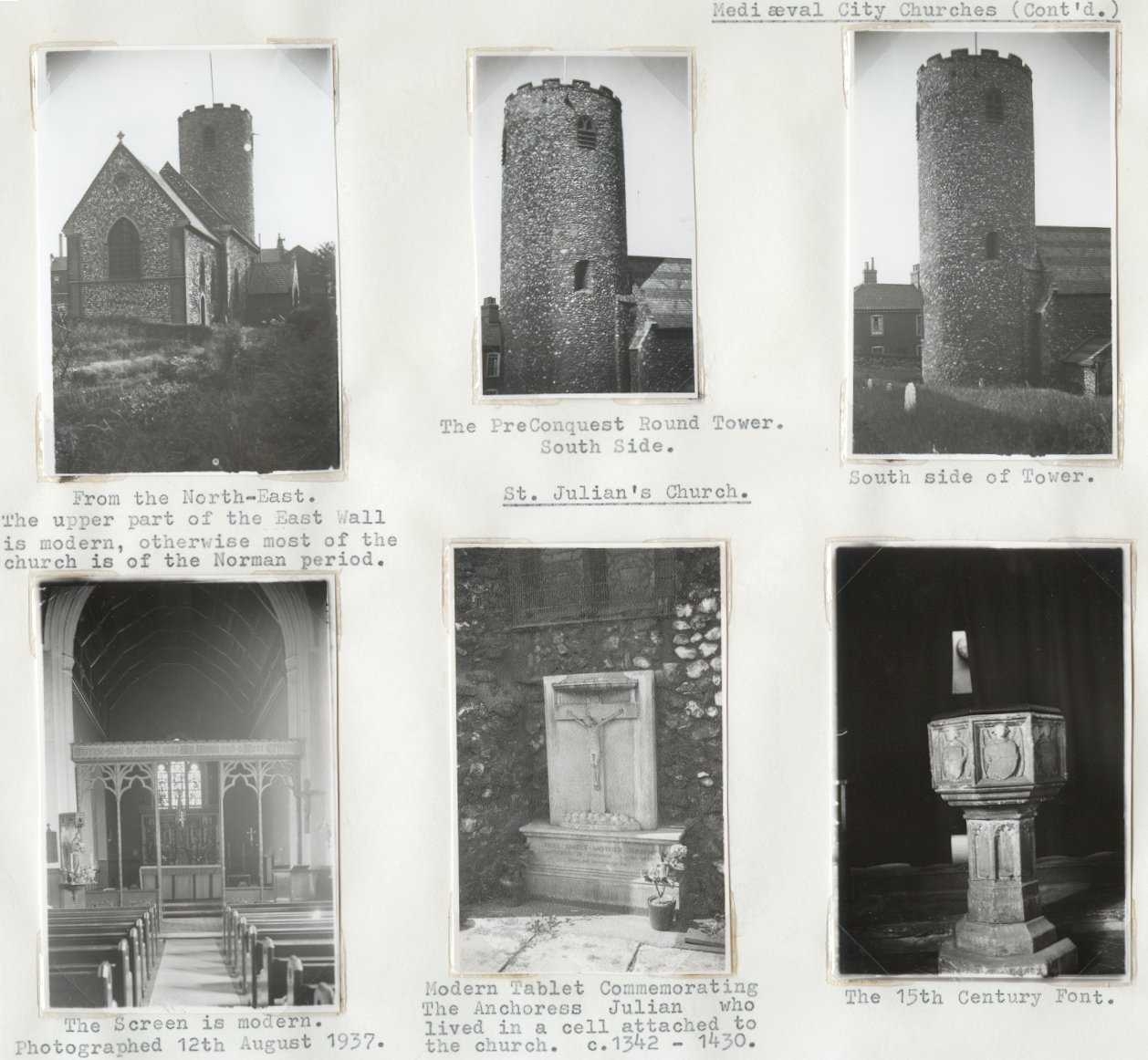 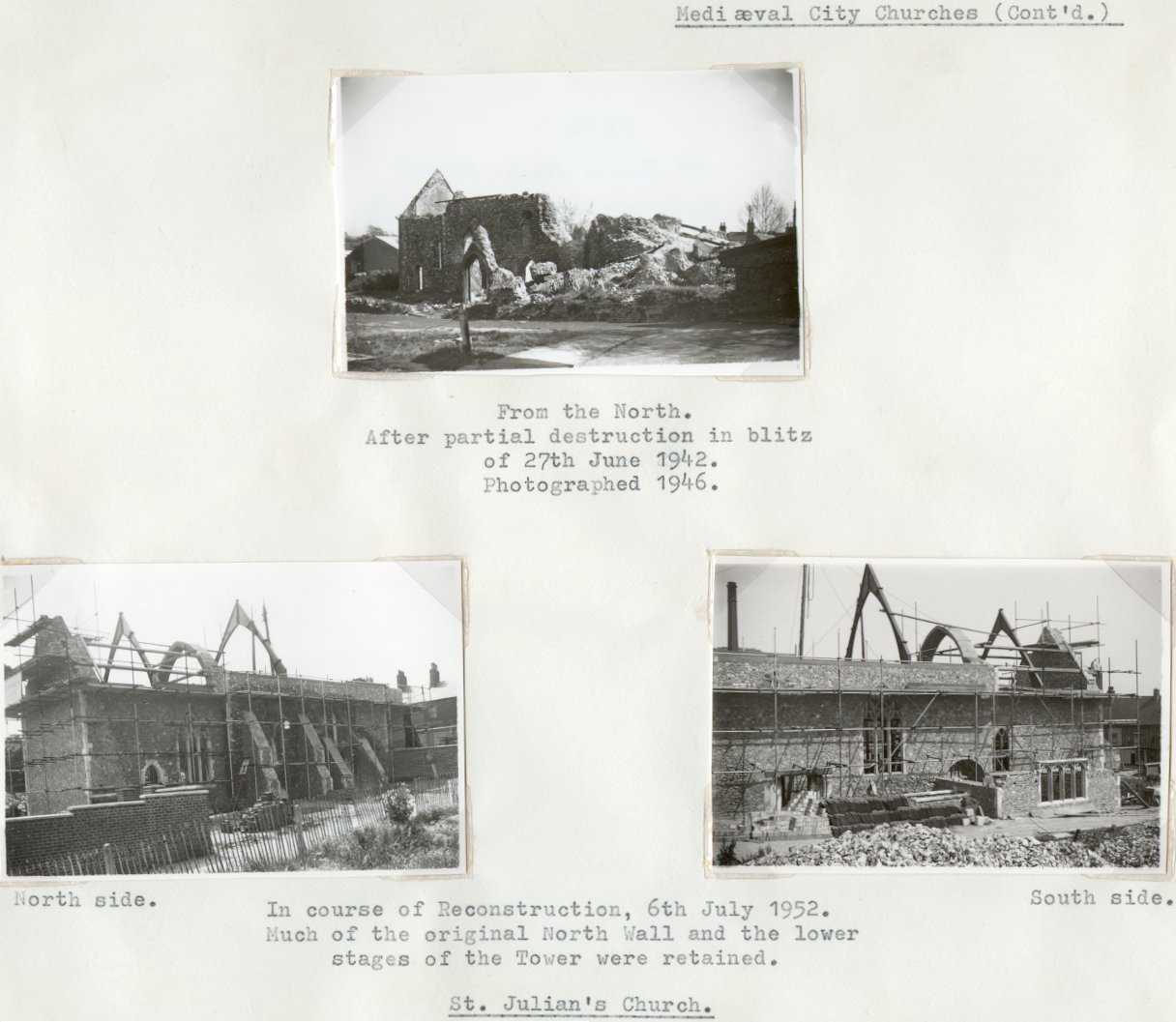 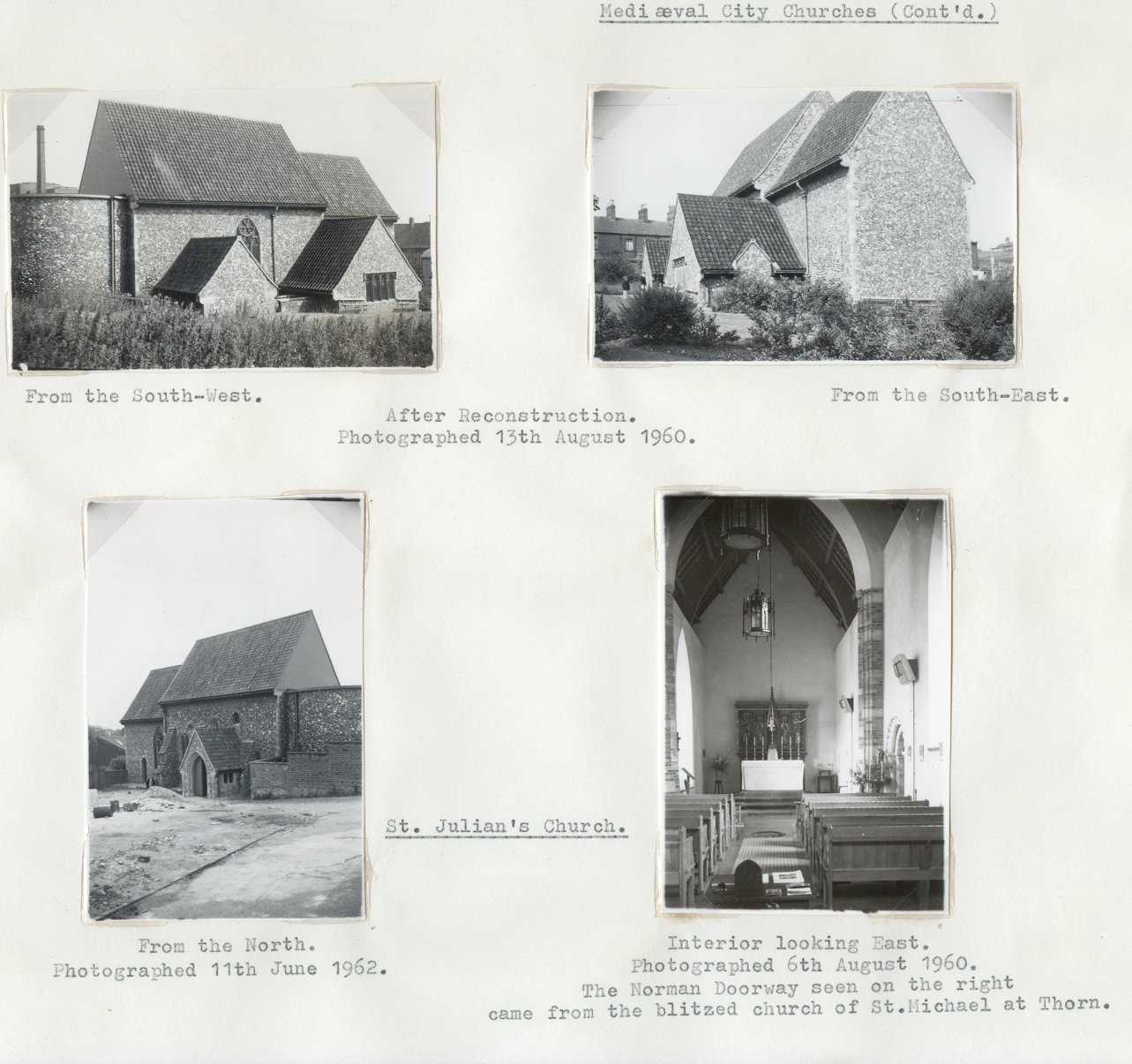 Isaac's House on King Street in Conisford is near St Julian's Church: 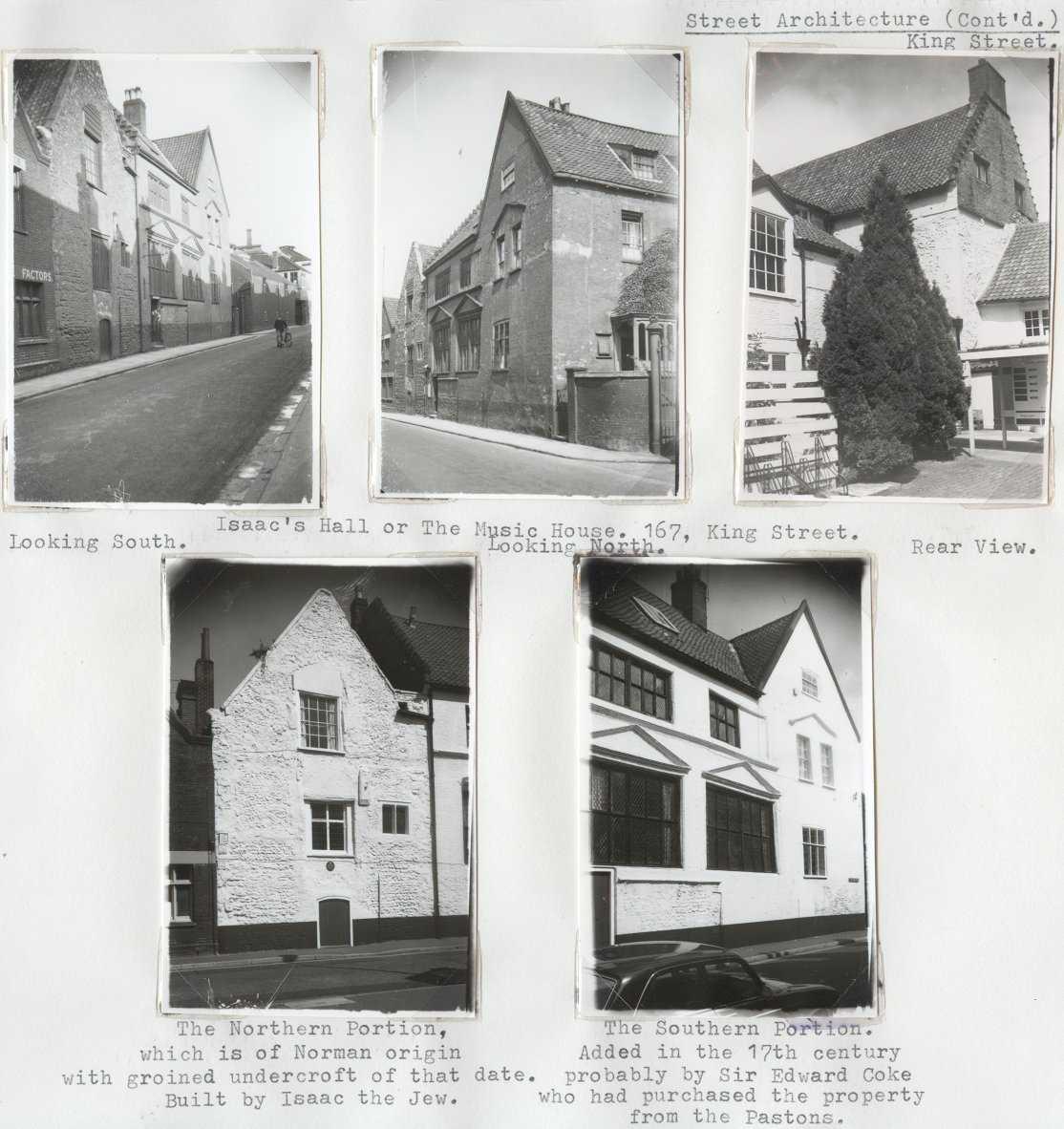 Continue down Rouen Road or King Street which join together. And before you get to Carrow Priory you see the ruins of Norwich's city walls. They are clearly identifiable with those in this scene from the Luttrell Psalter, which pretends it is of Constantinople: 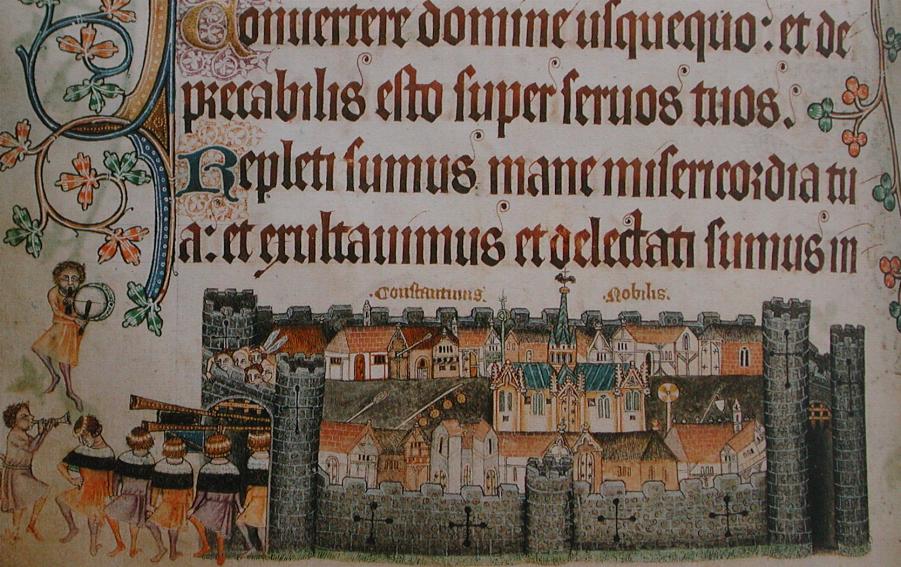 Beyond those ruined walls walk further, seeing a great ruined mansion and restored conservatory built by the Coleman family. Go to the end of that sreet, then turn left, until you come to Unilever. Ask at security there for an appointment to see Carrow Priory. It is as in these photographs, the Prioress' House kept beautiful, the Priory destroyed by Henry VIII, but they have now built a medieval herb garden from those still growing here from the days of the nuns and they still market these herbs in oil to Holland. 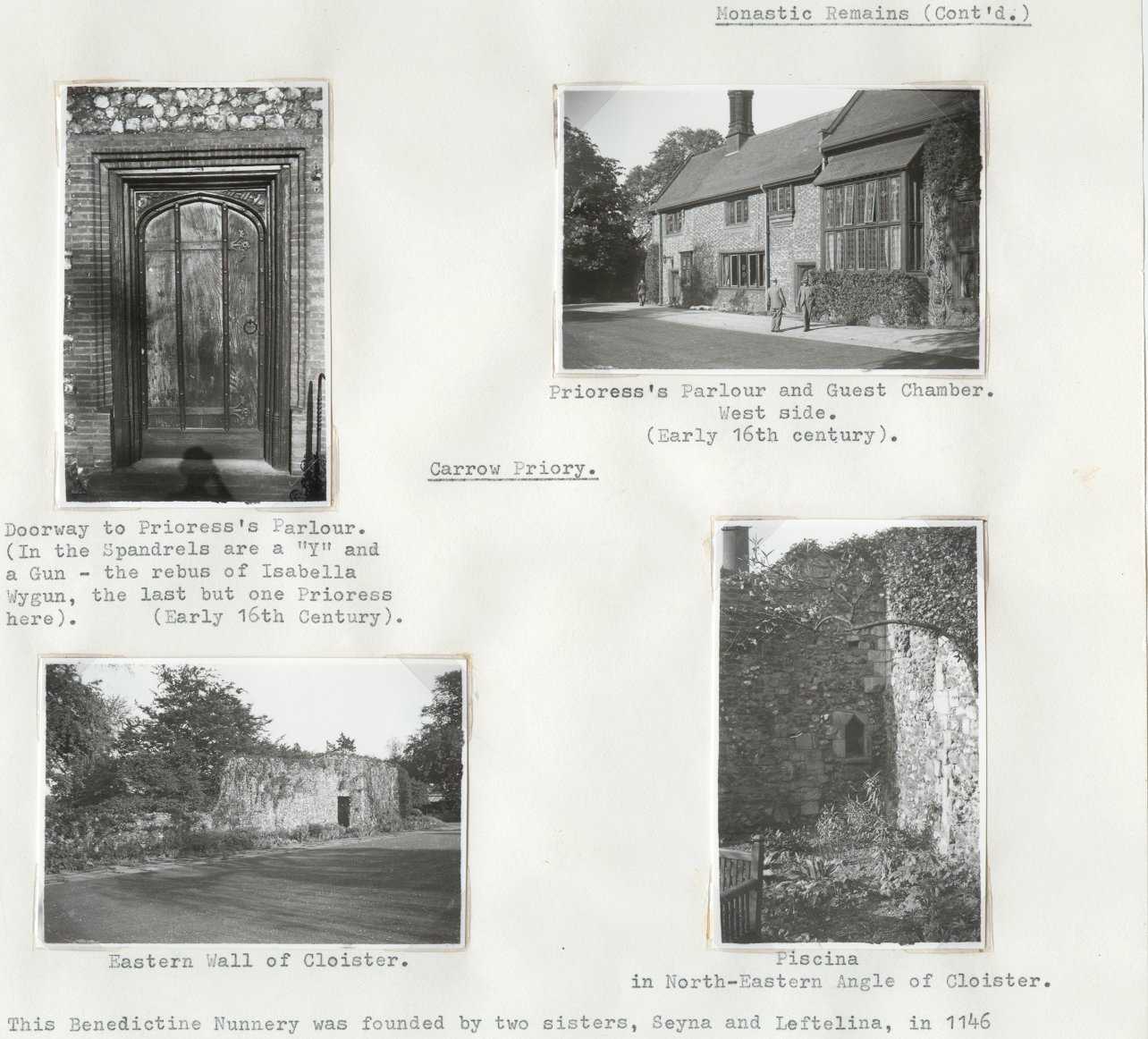 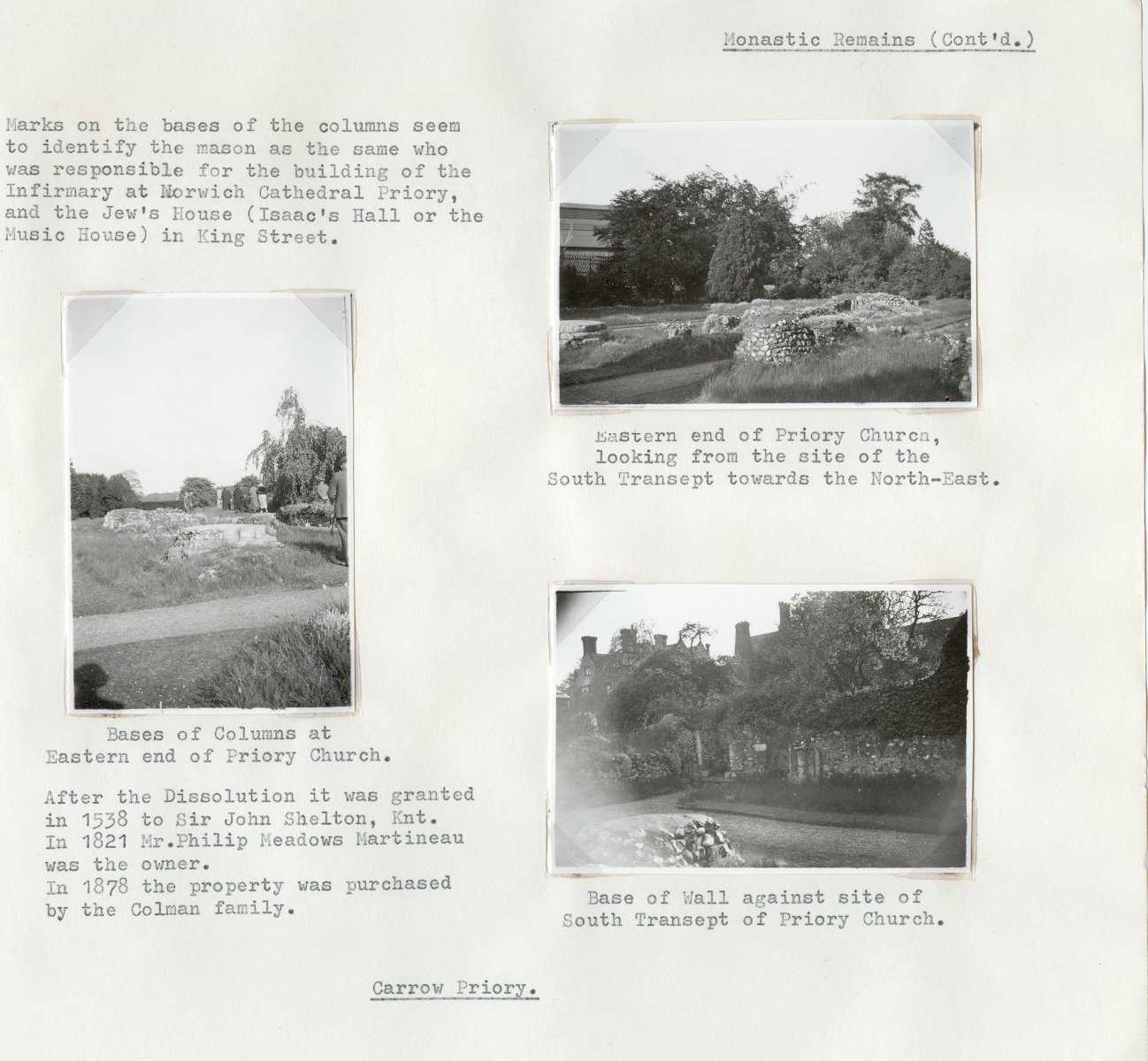 Marks on the bases of the columns seem to identify the mason as the same who was responsible for the building of the Infirmary at Norwich Cathedral Priory, and the Jew’s House (Isaac’s Hall or the Music House) in King Street.

Excellent resources for Julian's Norwich are Francis Blomefield, An Essay towards a Topographical History of the County of Norfolk . . . and other Authentick Memorials (London: William Miller, 1805-10), 11 vols: Volume IV, 1806, 81-3, 524-30, especially the manuscript volumes in the British Library Manuscript Reading Room which are illustrated with water colour sketches; and Walter Rye, Carrow Abbey, Otherwise Carrow Priory, near Norwich, in the County of Norfolk, Its Foundations, Officers and Inmates, Norwich, 1889.