STATIONS OF THE CROSS


I Jesus is condemned to death

he very air that Pilate breathes, the voice
With which he speaks in judgment, all his powers
Of perception and discrimination, choice,
Decision, all his years, his days and hours,
His consciousness of self, his every sense,
Are given by this prisoner, freely given.
The man who stands there making no defence,
Is God. His hands are tied, His heart is open.
And he bears Pilate's heart in his and feels
That crushing weight of wasted life. He lifts
It up in silent love. He lifts and heals.
He gives himself again with all his gifts
Into our hands. As Pilate turns away
A door swings open. This is judgment day.


II Jesus is given his cross

e gives himself again with all his gifts
And now we give him something in return.
He gave the earth that bears, the air that lifts,
Water to cleanse and cool, fire to burn,
And from these elements he forged the iron,
From strands of life he wove the growing wood,
He made the stones that pave the roads of Zion
He saw it all and saw that it is good.
We took his iron to edge an axe's blade,
We took the axe and laid it to the tree,
We made a cross of all that he has made,
And laid it on the one who made us free.
Now he receives again and lifts on high
The gifts he gave and we have turned awry.

e made the stones that pave the roads of Zion
And well he knows the path we make him tread
He met the devil as a roaring lion
And still refused to turn these stones to bread,
Choosing instead, as Love will always choose,
This darker path into the heart of pain.
And now he falls upon the stones that bruise
The flesh, that break and scrape the tender skin.
He and the earth he made were never closer,
Divinity and dust come face to face.
We flinch back from his via dolorosa,
He sets his face like flint and takes our place,
Staggers beneath the black weight of us all
And falls with us that he might break our fall.

his darker path into the heart of pain
Was also hers whose love enfolded him
In flesh and wove him in her womb. Again
The sword is piercing. She, who cradled him
And gentled and protected her young son
Must stand and watch the cruelty that mars
Her maiden making. Waves of pain that stun
And sicken pass across his face and hers
As their eyes meet. Now she enfolds the world
He loves in prayer; the mothers of the disappeared
Who know her pain, all bodies bowed and curled
In desperation on this road of tears,
All the grief-stricken in their last despair,
Are folded in the mantle of her prayer.

n desperation on this road of tears
Bystanders and bypassers turn away.
In other's pain we face our own worst fears
And turn our backs to keep those fears at bay,
Unless we are compelled as this man was
By force of arms or force of circumstance
To face and feel and carry someone's cross
In Love's full glare and not his backward glance.
So Simon, no disciple, still fulfilled
The calling: 'take the cross and follow me'
By accident his life was stalled and stilled,
Becoming all he was compelled to be.
Make me, like him, your pressed man and your priest,
Your alter Christus, burdened and released.

ystanders and bypassers turn away
And wipe his image from their memory.
She keeps her station. She is here to stay
And stem the flow. She is the reliquary
Of his last look on her. The bloody sweat
And salt tears of his love are soaking through
The folds of her devotion and the wet
folds of her handkerchief, like the dew
Of morning, like a softening rain of grace.
Because she wiped the grime from off his skin,
And glimpsed the godhead in his human face
Whose hidden image we all bear within,
Through all our veils and shrouds of daily pain
The face of God is shining once again.

hrough all our veils and shrouds of daily pain,
Through our bruised bruises and re-opened scars,
He falls and stumbles with us, hurt again
When we are hurt again. With us he bears
The cruel repetitions of our cruelty;
The beatings of already beaten men,
The second rounds of torture, the futility
Of all unheeded pleading, every scream in vain
And by this fall he finds the fallen souls
Who passed a first, but failed a second trial,
The souls who thought their faith would hold them whole
And found it only held them for a while.
Be with us when the road is twice as long
As we can bear. By weakness make us strong.

e falls and stumbles with us, hurt again
But still he holds the road and looks in love
On all of us who look on him. Our pain
As close to him as his. These women move
Compassion in him as he does in them.
He asks us both to weep and not to weep.
Women of Gaza and Jerusalem,
Women of every nation where the deep
Wounds of memory divide the land
And lives of all your children, where the mines
Of all our wars are sown: Afghanistan,
Iraq, the Cote d'Ivoire...  he reads the signs
And weeps with you, and with you he will stay
Until the day he wipes your tears away.

e weeps with you and with you he will stay
When all your staying power has run out
You can't go on, you go on anyway.
He stumbles just beside you when the doubt
That always haunts you, cuts you down at last
And takes away the hope that drove you on.
This is the third fall and it hurts the worst,
This long descent through darkness to depression
From which there seems no rising and no will
To rise, or breathe or bear your own heart beat
Twice you survived; this third will surely kill,
And you could almost wish for that defeat
Except that in the cold hell where you freeze
You find your God beside you on his knees.


X Jesus is stripped of His garments

ou can't go on, you go on anyway
He goes with you, his cradle to your grave
Now is the time to loosen, cast away
The useless weight of everything but love.
For he began his letting go before,
Before the worlds for which he dies were made,
Emptied himself, became one of the poor,
To make you rich in him and unafraid.
See as they strip the robe from off his back
They strip away your own defences too,
Now you could lose it all and never lack,
Now you can see what naked Love can do.
Let go these bonds beneath whose weight you bow,
His stripping strips you both for action now.


XI Crucifixion: Jesus is nailed to the cross

ee, as they strip the robe from off his back
And spread his arms and nail them to the cross,
The dark nails pierce him and the sky turns black,
And love is firmly fastened onto loss.
But here a pure change happens. On this tree
Loss becomes gain, death opens into birth.
Here wounding heals and fastening makes free,
Earth breathes in heaven, heaven roots in earth.
And here we see the length, the breadth, the height,
Where love and hatred meet and love stays true,
Where sin meets grace and darkness turns to light,
We see what love can bear and be and do.
And here our saviour calls us to his side,
His love is free, his arms are open wide.


XII Jesus dies on the cross

he dark nails pierce him and the sky turns black
We watch him as he labours to draw breath
He takes our breath away to give it back,
Return it to its birth through his slow death.
We hear him struggle breathing through the pain
Who once breathed out his spirit on the deep,
Who formed us when he mixed the dust with rain
And drew us into consciousness from sleep.
His Spirit and his life he breathes in all
Mantles his world in his one atmosphere
And now he comes to breathe beneath the pall
Of our pollutions, draw our injured air
To cleanse it and renew. His final breath
Breathes us, and bears us through the gates of death.


XIII Jesus' body is taken down from the cross

is spirit and his life he breathes in all,
Now on this cross his body breathes no more.
Here at the centre everything is still
Spent, and emptied, opened to the core.
A quiet taking down, a prising loose
A cross-beam lowered like a weighing scale
Unmaking of each thing that had its use
A long withdrawing of each bloodied nail.
This is ground zero, emptiness and space
With nothing left to say or think or do,
But look unflinching on the sacred face
That cannot move or change or look at you.
Yet in that prising loose and letting be
He has unfastened you and set you free.


XIV Jesus is laid in the tomb

ere at the centre everything is still,
Before the stir and movement of our grief
Which bears its pain with rhythm, ritual,
Beautiful useless gestures of relief.
So they anoint the skin that cannot feel
And sooth his ruined flesh with tender care,
Kissing the wounds they know they cannot heal,
With incense scenting only empty air.
He blesses every love that weeps and grieves,
And makes our grief the pangs of a new birth.
The love that's poured in silence at old graves
Renewing flowers, tending the bare earth,
Is never lost. In him all love is found
And sown with him, a seed in the rich ground.

e blesses every love which weeps and grieves
And now he blesses hers who stood and wept
And would not be consoled, or leave her love's
Last touching place, but watched as low light crept
Up from the east. A sound behind her stirs
A scatter of bright birdsong through the air.
She turns, but cannot focus through her tears,
Or recognise the Gardener standing there.
She hardly hears his gentle question 'Why,
Why are you weepiing?', or sees the play of light
That brightens as she chokes out her reply
'They took my love away, my day is night'
And then she hears her name, she hears Love say
The Word that turns her night, and ours, to Day. 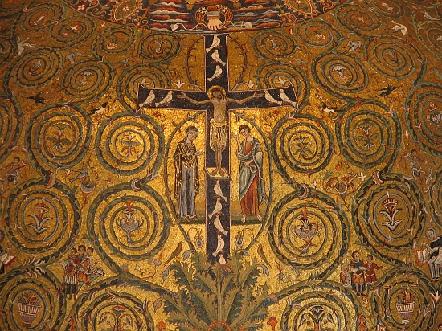