A PROPOSAL FOR THE EU

So twice five miles of fertile ground
With walls and towers were girdled round;
And there were gardens bright with sinuous rills,
Where blossomed many an incense-bearing tree;
And here were forests ancient as the hills,
Enfolding sunny spots of greenery.


We recognize that the European Union is at a crisis, a crisis occurring simultaneously with climate change, increasing unrest in Africa, Syria, Ukraine (following wars in Iraq and Afghanistan that were waged without taxing for them), along with the melt-down of global indebtedness./2 Loyalty to the EU is being shattered by its desire to be inclusive while many EU citizens in the face of austerity seek a return to the nationalism that had caused the genocide of WWII./3

There is a partial solution that is ecological and inclusive while at the same time serving EU citizens and others with their greatest needs for sustainability: for work and for housing, without which they cannot raise a family. I see young Florentines graffitoing their schools, even the Ospedale degli Innocenti, in their anger that there is no hope for their employment when they leave school. I hear Italian artigiani, craftspeople, complaining that their rent and taxes are too high and they must abandon their centuries of skills. Florence is a microcosm of Europe. In the past it flourished because of its skilled craftspeople and its careful banking. It invented the florin, Europe's first Euro. But the florin was based on work, the work of its citizens. Now work is outsourced to the Third World as being cheaper, slave labour. It is even insourced with Chinese workers in Prato creating cheap goods with labels, 'Made in Italy'. This is a failed economy. Henry Ford made it possible for his workers to buy a Model T. Now Detroit moulders. http://www.theguardian.com/artanddesign/gallery/2011/jan/02/photography-detroit#/?picture=370173060&index=15

Instead of falsely relying on high technology to fix economic problems, we need to balance it with the human dimension: the family; the house. To enable an economy in which one member can work to support his or her family. Eliminating car ownership through the intelligent use of land in this model would decrease the cost of raising a family. Reduce carbon energy.

This essay proposes building garden cities,/4 microcosms of the European Community within the European Union. Around our cities are abandoned industrial sites. Where these are not polluted such areas could be subjected to high taxation unless released for the building of garden cities, a mixture of balconied and arcaded buildings and cottages with verandas, with tree-lined landscaping where children can play and learn. The garden cities should contain workspace for craftspeople and their apprentices, and at the periphery allotments for vegetable gardens supplying produce to a central farmers' market. Bicycles and bus service could provide transport, reducing the carbon footprint. There should be a library, an orchestra, a park, a school.

The architects should plan and discuss the landscaping and buildings with those who will build and maintain them, nationals and immigrants, working and living side by side, learning each others’ cultures and skills. In this way there can be hope for families to have living and working space with access to land and fresh air and to create self-sufficient economies, with a family-run bakery, grocery, laundry, ironmonger. We need to return to that sense of economy, which in its Greek meant 'home'. To centre it on the home of the family, sheltering it, sustaining it, serving it. Without damaging the environment.

Some positive models are these:

Saltaire in Yorkshire was built as the antithesis to the crowding, squallor and disease of Bradford as a model mill town by Sir Titus Salt, then doubled in size by Sir James Roberts. It is built on the river Aire, an adjacent canal and a railroad with a station, in the countryside. Its 800 row houses for the workers are built of stone next to the great wool mills. Salt designed the village with wide streets, a large dining hall and kitchens, baths and washhouses, an almshouse for retired workers, hospital and dispensary, educational institute and church, ample recreational land and allotments, in order to improve the diet of the workers. Four lions flank its main street, named 'War', 'Peace, 'Diligence', 'Vigilance'. The architecture is borrowed from the Italian Renaissance. Now mainly used for a computer centre since the mills shut down, it is filled with crafts people selling their wares. The local people flock to it for its beauty and friendliness. It is a UNESCO World Heritage Site. http://it.wikipedia.org/wiki/Saltaire http://www.saltairevillage.info/ http://www.umilta.net/SirJamesRoberts.html

Isolotto in Florence, designed partly by Giovanni Michelucci for the mayor, Giorgio La Pira, following WWII, was built on the periphery of the city to give 1000 poor families, who had lived in San Frediano in crowded, often windowless, slum dwellings, apartments within buildings and cottages set amongst trees by the river Arno./5 It is still beautiful though it has lost its original library. http://it.wikipedia.org/wiki/Isolotto 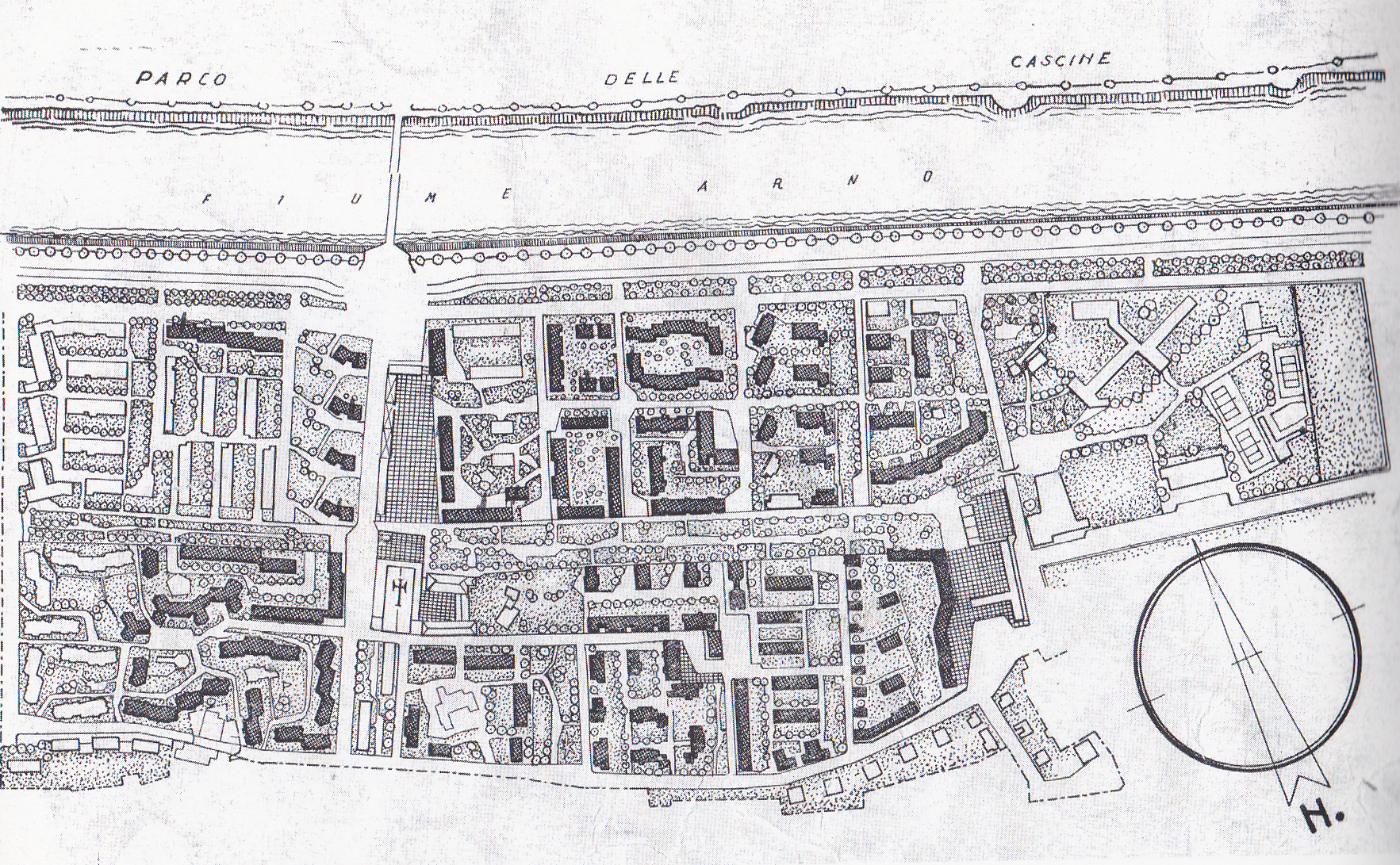 The University of California after the war bought up shipyard builders' housing in the township of Albany on the San Francisco Bay. The original family barracks are now replaced by more tasteful buildings but which are still set amongst a landscape where children can play and which has always included a childcare centre. The students are from all parts of the globe, they reach the university by bicycle, bus or car, and live here as in a Global Village. http://www.housing.berkeley.edu/livingatcal/video_uni_village_apts.html

Negative models are the following: crowded inner cities with stone and cement paving and where the air is polluted; high rise social housing surrounded by concrete, in which crime flourishes; suburban subdivisions based on car ownership as in the US and in Melbourne, Australia, where matching homes are built each with their own lawns that use too much water, and which are serviced by shopping malls with vast concrete parking lots at a considerable distance from the residences; Roma camps set in polluted mud on the peripheries of cities.

Such garden cities in Romania could reduce the migration of Roma to Italy, France and elsewhere, as these families seek space in which to raise their children and work alongside Romanians. Such garden cities in the British Isles could provide homes for British and Travellers also to live alongside each other. Vandana Shiva is speaking of the need for access to land, a diminishing of the control of multinationals creating debt cycles in agriculture, and of the common good of seeds. http://www.navdanya.org/ When I spoke with her about this concept of garden cities for Europe she immediately saw that it provided, through the government, a beneficial infrastructure for its citizens, the interlacing of the earth and the people. Which is the true task of government.

1. Samuel Taylor Coleridge's poem describes the yurt of gold and wicker as a summer palace built by the nomadic Emperor Kubla Khan. This essay seeks to explore ways in which the EU could enable the housing of its own largest minority, the nomadic Roma, who themselves say they cannot accept social housing with cement or camps with polluted mud, but could acclimatize themselves to garden cities. In poor housing they become ill with TB. Before, in their caravans with their outdoor living, they were free of the now drug-resistant disease. I am also influenced here by Ted Nelson, the inventor of hypertext (and now of Xanadu and 'Xanadocs'), which led to the Commons of the Web, invented by Sir Timothy Berners-Lee. How I loved that moment at the Olympic Games in Britain when this was celebrated! Along with the Great Ormond Street Hospital children in their cots celebrating J.M. Barrie! We share a dream!

2. I am writing these lines following the May 7-9 State of the Union of the European Union in Fiesole and Florence where all these topics were under discussion except that of climate change. This was the question I was asked to submit to the debate held in the Salone dei Cinquecento of the Palazzo Vecchio:   'Could the European Union in this time of austerity and scapegoating racism restore hope by responding to its EU citizens' needs for work and housing by enabling 'green' garden cities, like Florence's Isolotto? With housing and landscaping to be built and maintained in part by EU citizens currently out of work and homeless, including nationals and Roma/Traveller EU citizens, western and eastern EU citizens, working and living side by side? Garden cities that would have space for children to play and learn, with bicycle and bus transportation, workshops for craftspeople and apprentices, vegetable gardens and farmers' markets, libraries and orchestres. Priority for work and housing to be for EU citizens. Non-EU citizens to have dormitories, the right to study, to make and sell artefacts, to grow and sell garden produce, to share their skills with citizens, eventually themselves to achieve citizenship, but not to have factory or construction work needed by EU citizens. Land could be obtained by raising taxes on abandoned industrial properties, then re-zoned as residential with lowered taxes where 'green' garden cities are being built. One member to be guaranteed work to house, educate and receive medical care for his or her family, achieving this through fair taxation, while reducing EU bureaucracy that currently does not benefit its increasingly impoverished EU citizens?'

3. Julian Benda, La Trahison des Clercs (The Betrayal of the Intellectuals), 1927, presciently saw the growing danger of nationalism. Germany, between the wars, on top of the costs of World War I, was made by the Allies to pay reparations, often funded by loans at interest. In turn Jews, because they were bankers, were scapegoated. The Holocaust by Germany thus had its partial cause in these reparations paid to France, Belgium; Italy and England. None of our nations is innocent. See http://en.wikipedia.org/wiki/World_War_I_reparations 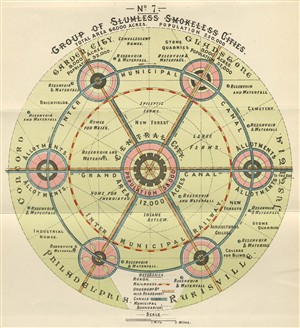 Jian-Ming Zhou, the Chinese and now Italian scholar living in Florence, has these important publications on world agriculture. Posted 15 February 2011.