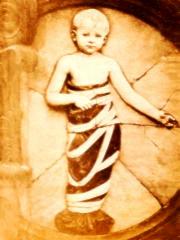 VER a century ago, my Mother Foundress, Agnes Mason, C.H.F., visited Florence, even before founding our Community of the Holy Family , of which I am a Hermit, and there she avidly purchased an enormous portfolio of sepia Alinari photographs of Italian works of art. These can now be seen in our Biblioteca Fioretta Mazzei in the 'English Cemetery ', Piazzale Donatello 38, Florence. She had dreamed of our Community while sitting in an olive tree above Florence, writing in its Rule that it would encourage scholar artists to teach the young, preserving the past through the present for the future, and that all connected with it, including its children were to preserve such beauty as good salt in the world. Her portfolio has now returned to Florence.

I joined our Community as a Novice in 1992, having always dreamed of being one of them, since a schoolgirl there in 1943. Then, in 1996, our Bishop decided to end us. The Sisters, for days, burned records. Once, in the midst of this, a Sister came to me. 'These are old photographs, not colour ones, of no use to anyone. They are to be burnt, too, but perhaps you might like them'. It was an entire portfolio stuffed with Fratelli Alinari sepia photographs of over a century ago. They are amongst my most treasured possessions. 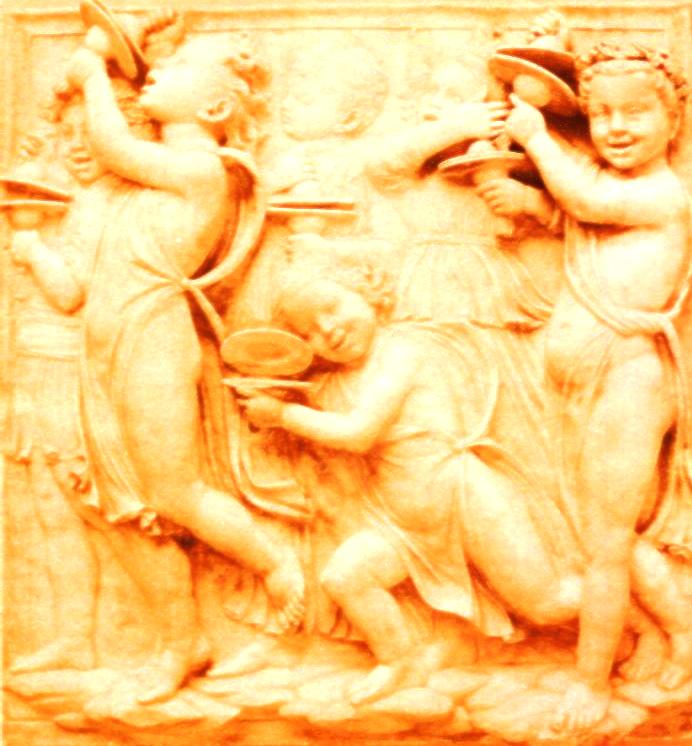 The Cantoria of Luca Della Robbia, today in the Museum of the Opera di Duomo, the above panel in the bottom right recess below, beneath' 'LAVDATE EVM IN CIMBALIS BENE SONANTIBUS: L AVDATE EVM IN CIMBALIS IUBILA NTIONIS', from Psalm 150. For further panels from this Cantoria and from the other by Donatello see Heavenwindow, nine all told. 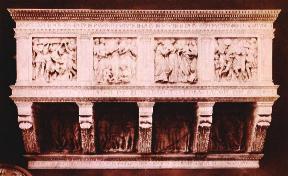 Sister Lucy had mounted them carefully on non-acidic brown paper, the paper from parcels, so often the stamps and addresses are there on the other side. And what they show is an Italy before cars, before petroleum fumes ate into buildings and chemically eroded frescoes, an Italy where stone has chisel-edged cornices, a clarity and definition no longer there. These are a magnificent record of a lost past, so nearly consumed in flames, so eroded by the egoistic and lonely American form of transport, so threatened with Allied bombs. Time and ignorance destroy, but love and knowledge seek to preserve whatever is beautiful, whatever is of true value. I remember the Bishop of Perugia preaching at Mass in St Francis' Assisi Basilica, and who is now the Cardinal of Florence, citing his own St Francis' Lauds to God, 'Tu sei Bellezza', 'You are Loveliness'. Where we use art to laud God there is loveliness. It is here, in these sepia photographs treasuring treasures, and from which I was taught as a child in wartime in England to love God and to love Florence.

Let me give but two examples of the putti of the Hospital of the Holy Innocents in Florence, made from terra cotta and glazed in blues and whites by Andrea Della Robbia, that are in this portfolio. The first is from an Alinari photograph, long before colour, unless it were painted in by hand.

The second takes an Alinari photograph and engraves it, printing it out in blue ink. 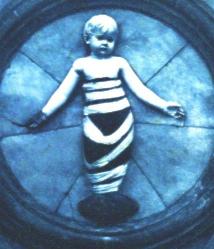 Mother Agnes especially concentrated on the art representing children, because she desired to found not only an Order, but a teaching Order. She had worked in English slums, in workhouses, teaching literacy to those who lacked it. She believed intensely in beauty, for the poorest. In Florence she found it all about her. The Hospital for the Holy Innocents surrounded its Foundling children, children abandoned by Florentine mothers and fathers, and who were still cared for there when she visited it, with paintings of the Slaughter of the Innocents and with the Nativity, such as that by Ghirlandaio, where amidst these same Innocents, angels proclaim the Birth of the Messiah. Florence gave much of its greatest art to these children who today would be aborted. Florence, as a civic state, exemplified not cruelty, but mercy. It sought the dignity of humanity through the love of God and the love of neighbour. And from that love sprang the beauty of its art, that we today shut up in museums as irrelevant to our lives, our spirituality. 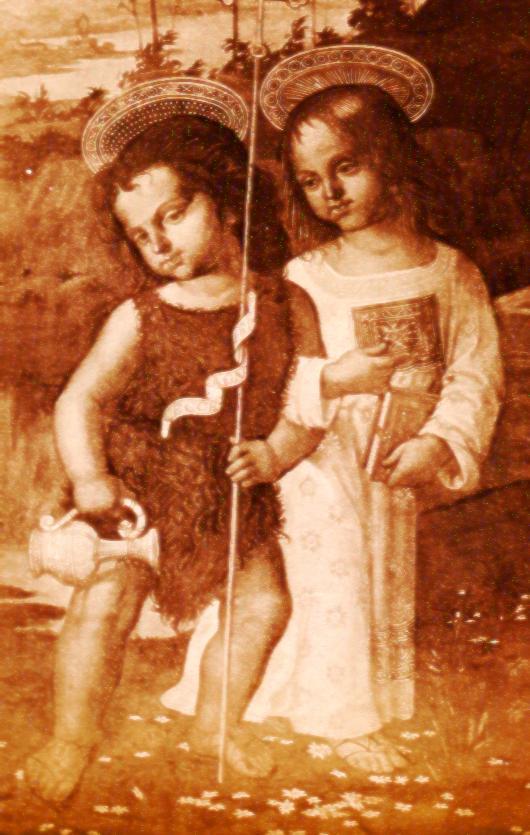 The story is told in Florence of Hitler's visit. Someone says to him as they cross the Bridge of the Holy Trinity, with its curves like Michelangelo's and its sculpture of the Four Seasons, 'This, Fuhrer, is the most beautiful bridge in the world'. Hitler, looking across at the Old Bridge, the Ponte Vecchio, agrees that it is beautiful and should not be destroyed. So when the Allies came the Germans blew up all the buildings on either side of the Ponte Vecchio in order to preserve that bridge, and blew up all the other bridges in Florence, including the most beautiful one, the Ponte Santa Trinita`. Ponte Santa Trinita` had to be painstakingly rebuilt after the war. What you are seeing in this hundred-years-old plus sepia print purchased by Mother Agnes Mason in Florence is Florence before that destruction and that re-building. 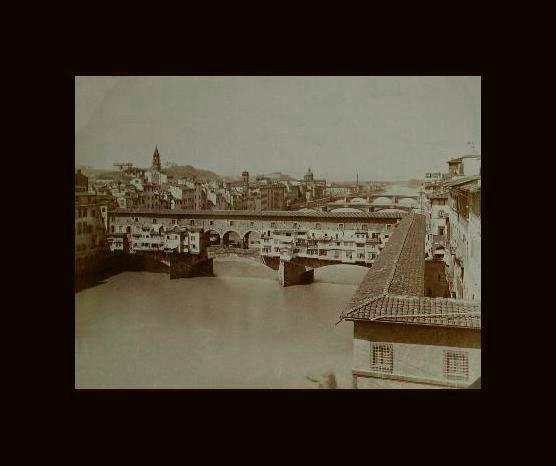 I used to cross either of these bridges often when I was Curator of the Brownings' Casa Guidi . So when the edition of Elizabeth Barrett Browning's Aurora Leigh and Other Poems by my father and myself was published by Penguin and they asked what I wanted on its cover, I immediately said, 'Michelangelo's Aurora from the Medici Tombs'. And I said for them to order a modern black-and-white photograph from Alinari and tint it sepia as it would have been in the Brownings' day. Which they did. But in this portfolio is just such a sepia rendition. 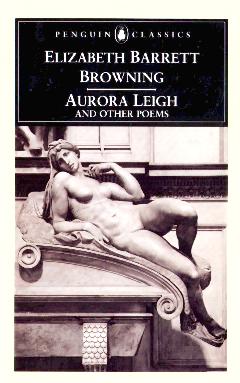 For Mother Agnes sought out not only images of children, but also of women, of strong women, of women saints, of women representing, even in agony, the dawn of freedom from tyranny.

Being deeply interested in Catholic monasticism, herself a part of the Anglican Oxford Movement that so sought to draw closer to Catholicism, she visited the Certosas outside Florence and at Pavia, and acquired sepia photographs there of its church, its cloister and these stiffly-posed, bearded Carthusian contemplatives. Often in these sepia photographs one will see a shadowy person, someone who stopped to look, then walked away, the exposures needing much time. Where there are figures, they had to stand stockstill for ages.

Mother Agnes was also much drawn to the concept of Benedictine monastic hospitality, that monks and friars and nuns entertain Christ in the stranger, the pilgrim, unawares, and this fresco by the Dominican Fra Angelico greeted one on entering Holmhurst St Mary , in full colour. 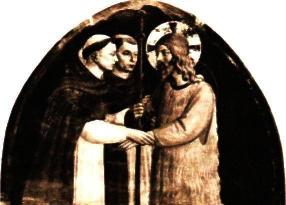 Della Robbia in the Hospital of St Paul by Santa Maria Novella celebrated the peaceable greeting between the two Founders of rival Orders, St Dominic of the Order of Preachers, St Francis of the Franciscans, in terra cotta by Della Robbia, which Augustus Hare engraved, and which also was present at Holmhurst St Mary , becoming even the symbol of its peaceable ecumenical Theological Library in which Godfriends started. 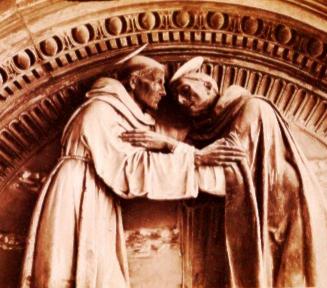 Perhaps there is a chance of Godfriends, of its Hermit of the Holy Family, living amongst the Dominicans, as had the original Friends of God of the Middle Ages. So it is joyous to find amongst these Alinari prints so much by Fra Angelico. Here the Annunciation of the Word of God to be flesh in our midst, with Mary contemplating on Truth and Wisdom . One climbs the stairs at San Marco to see this at their head, leading into each friar's cell, again painted with the same beautiful Florentine maiden, sometimes glimpsed as Eve, more usually as Mary, EVA/AVE . The architecture of San Marco's cloister is exactly this. 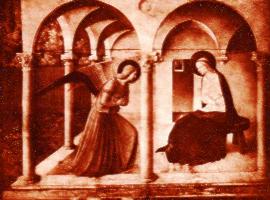 The same vaulted ceilings, the same delicate capitals, the same arches, the same play of light and shade.
Except that Mary's House in Nazareth is somewhat more humble and lowly compared to the convent built by the Medici Princes for the Dominicans in Florence who had grumbled at walking daily from and to San Domenico in Fiesole.

And here, which is what every cloister represents, Paradise, and peaceable reconciliation. Lay and monastic together, all the Orders present, the Church as the one Body of Christ, Quaker, Methodist, Anglican, Lutheran, Catholic, Orthodox, in a great Carol of Love. But, of course, the real Fra Angelico painting at San Marco is created with colours as vivid as precious gems, the colours of the stones of the twelve-gated City of Jerusalem. 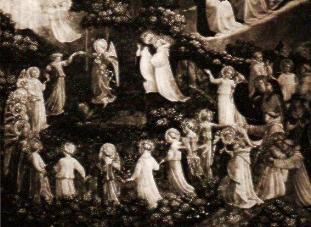 And to enter such we need to be as joyous as little children singing and playing in praise to God. 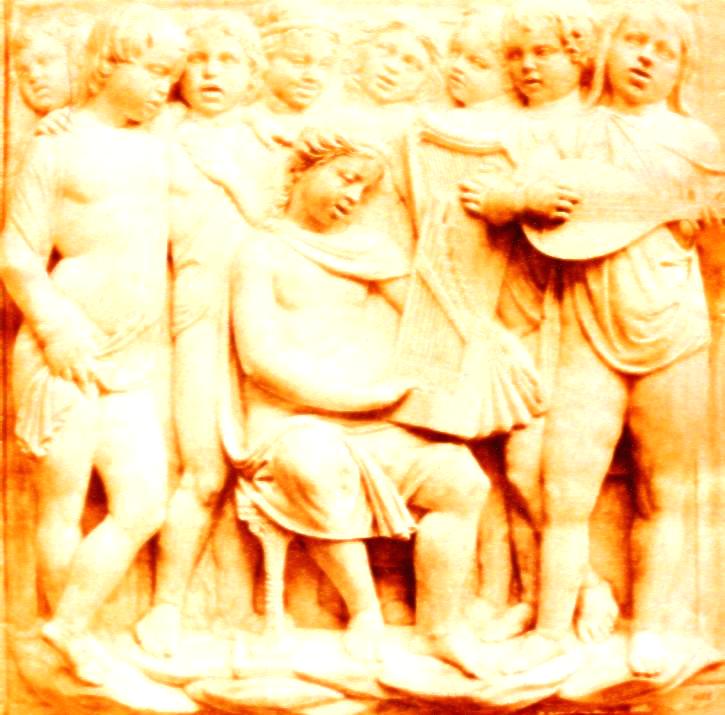 JULIAN OF NORWICH, HER SHOWING OF LOVE AND ITS CONTEXTS ©1997-2019 JULIA BOLTON HOLLOWAY  || JULIAN OF NORWICH || SHOWING OF LOVE || HER TEXTS || HER SELF || ABOUT HER TEXTS || BEFORE JULIAN || HER CONTEMPORARIES || AFTER JULIAN || JULIAN IN OUR TIME ||  ST BIRGITTA OF SWEDEN  ||  BIBLE AND WOMEN || EQUALLY IN GOD'S IMAGE  || MIRROR OF SAINTS || BENEDICTINISM|| THE CLOISTER || ITS SCRIPTORIUM  || AMHERST MANUSCRIPT || PRAYER|| CATALOGUE AND PORTFOLIO (HANDCRAFTS, BOOKS ) || BOOK REVIEWS || BIBLIOGRAPHY ||