JULIAN OF NORWICH, HER SHOWING OF LOVE AND ITS CONTEXTS ©1997-2015 JULIA BOLTON HOLLOWAY  || JULIAN OF NORWICH  || SHOWING OF LOVE || HER TEXTS || HER SELF || ABOUT HER TEXTS || BEFORE JULIAN || HER CONTEMPORARIES || AFTER JULIAN || JULIAN IN OUR TIME ||  ST BIRGITTA OF SWEDEN  ||  BIBLE AND WOMEN || EQUALLY IN GOD'S IMAGE  || MIRROR OF SAINTS || BENEDICTINISM|| THE CLOISTER || ITS SCRIPTORIUM  || AMHERST MANUSCRIPT || PRAYER|| CATALOGUE AND PORTFOLIO (HANDCRAFTS, BOOKS ) || BOOK REVIEWS || BIBLIOGRAPHY ||

went on pilgrimage to Rome, to be there 21 January 2001, in quest of two saints, Saint Agnes and Saint Cecilia, both of whom are named in the Canon of the Mass, because they were important for two later women contemplatives, Saint Birgitta of Sweden and Julian of Norwich.

ccording to her legend, Agnes was a young girl who refused to sacrifice to pagan idols, even when exposed in a brothel by the Piazza Navonna, and who was then executed with stabbing in the throat, around 304 A.D. She was buried in the catacomb given her name. When the Emperor Constantine's daughter, Constantia, died, she was buried in a mausoleum beside Agnes' catacomb, 354 A.D. Both the Basilica of Sant' Agnese and the Mausoleum of Santa Costanza are magnificently mosaiced, the Mausoleum's being earlier, that of Sant'Agnese commissioned by Pope Honorius (625-638), who had himself portrayed with Pope Sylvester I (314-335), founder of the Basilica, on either side of the crowned and jeweled figure of the young girl. Likewise the bones of the saint indicate her youthfulness.

Each year, on her feast of 21 January, two lambs, garlanded and crowned with roses, are brought into the Basilica in baskets, placed on that altar above her tomb, below the mosaiced apse with her portrait, and blessed at Mass. These are then taken to the Basilica of Santa Cecilia in Trastevere, their wool spun and woven by the Benedictine nuns of St Cecilia there into the pallium the Pope next blesses on the altar above St Peter's Tomb, then gives to each metropolitan archbishop, the pallium signifying their rank in the Church's hierarchy.

aint Cecilia's legend is even more shrouded in mystery than is Saint Agnes', yet here again we have the body. She is said to have lived in the time of Pope Urban I (222-230), but in his reign there were no persecutions against the Christians. Married to the young Valerian, she insisted on retaining her virginity and converted both him and his brother Tiburtius to Christianity. For refusing to sacrifice to pagan idols they were all martyred, Saint Cecilia first steamed in her own bathhouse, now beneath her church, then executed with three sword blows , but after which she continued to live for three more days, preaching to the Roman people and giving her house to the Church, finally dying, the legend says, 22 November 280. It is more likely that she, like Saint Agnes, lived and died under Diocletian and his imperial persecutions against the Christians. Much later, she came to be associated with the playing of the organ and thus the Patron Saint of Music. (See Julian Rhodes' Dream Organs: http://cdmnet.org/Julian/organs.htm)

Saint Cecilia's uncorrupted body, garbed in exquisite cloth of gold, was then discovered, because of his dream vision of her, in the Catacomb of her name by Pope Paschal I in 821, who had it brought back to her palace she had bequeathed to be a church and laid it beneath the altar there, placing above it a fine mosaic of her beside himself, wearing the pallium, Saints Paul and Peter, flanking the figure of the blessing Christ, Saint Valerian, and Saint Agatha, who is also named with Agnes and Cecilia in the Canon of the Mass and to whom Pope Paschal co-dedicated this church. 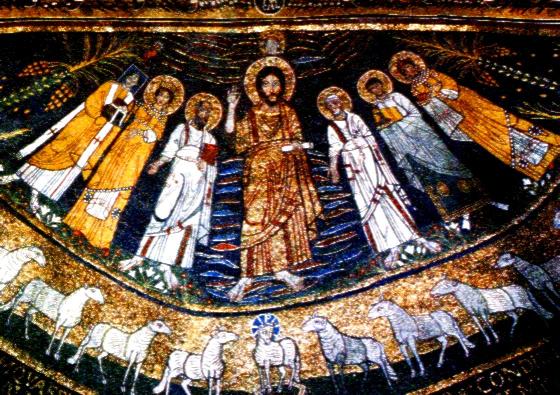 Later, in the sixteenth century, the titular Cardinal of the church rediscovered her body. Pope Clement VIII and all the peoples of Rome rushed to see it, finding it still clothed in tissue of gold, lying modestly on its side, the neck wound covered with a golden amulet. Stefano Maderno, who created the fountains in St Peter's Piazza, was then commissioned to sculpt what he saw.

Visiting Santa Cecilia in Trastevere at Vespers, listening to the Benedictine nuns, who would soon be spinning and weaving the lambs' wool, sing the Office, then attending Mass the following day with the Blessing of the Lambs, in the midst of Roman school children, I thought of many who knew and loved these stories, recalled in the Canon of the Mass. Julian in Norwich compared herself to Saint Cecilia in Rome. 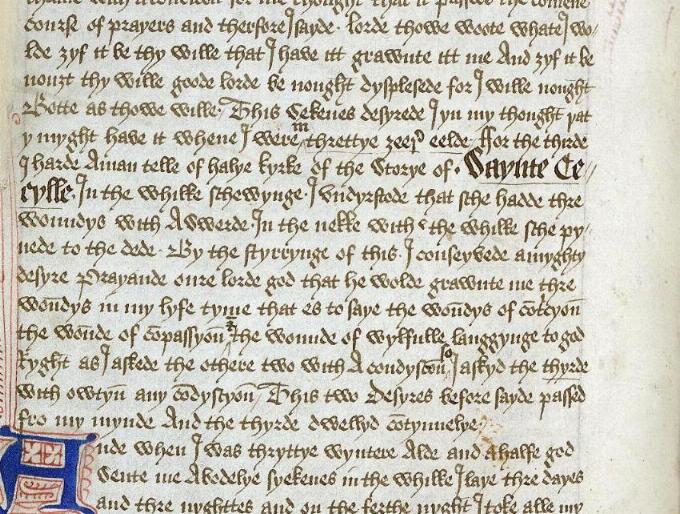 By Permission of the British Library, Amherst Manuscript, Additional 37,790

Chaucer gave Saint Cecilia's Legend to his Second Nun to tell in the Canterbury Tales. Saint Birgitta of Sweden used to pray daily to Saint Agnes of Rome who, in a vision, offered to her her own mosaiced crown and who, as a native speaker and a woman, succeeding in teaching the Swedish saint her needed Latin, which her male ecclesiasts had failed to do. 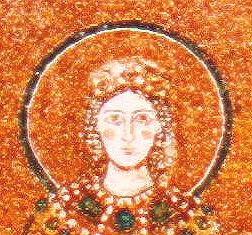 My Mother Foundress, Agnes Mason, CHF, chose as her two patrons, Saint Agnes and Saint Lawrence. Don Divo Barsotti preached on an American, who, as a boy in Ireland, had been told of St Cecilia's bravery by his grandmother, and so became a priest, even a cardinal. These young women shed their blood, gave their lives for the Church, and so wove the tapestry of their tales into the Canon of the Eucharist and into ecclesiastical history. The 'Agnus Dei', 'Lamb of God', in Swedish, 'Gods Lamm', is both male and female. As had been Christ's Lovers in the Gospels. No Pope, Cardinal, Archbishop, Bishop, priest, or laywoman, can forget their stories. Where they are invoked in the Canon of the Mass, their names drop like pearls from a golden crown, the first, a slave, 'Felicity, Perpetua, Agatha, Lucy, Agnes, Cecilia, Anastasia'.