JULIAN OF NORWICH, HER SHOWING OF LOVE AND ITS CONTEXTS ©1997-2019 JULIA BOLTON HOLLOWAY  || JULIAN OF NORWICH  || SHOWING OF LOVE || HER TEXTS || HER SELF || ABOUT HER TEXTS || BEFORE JULIAN || HER CONTEMPORARIES || AFTER JULIAN || JULIAN IN OUR TIME ||  ST BIRGITTA OF SWEDEN  ||  BIBLE AND WOMEN || EQUALLY IN GOD'S IMAGE  || MIRROR OF SAINTS || BENEDICTINISM || THE CLOISTER  || ITS SCRIPTORIUM  || AMHERST MANUSCRIPT || PRAYER|| CATALOGUE AND PORTFOLIO (HANDCRAFTS, BOOKS ) || BOOK REVIEWS || BIBLIOGRAPHY ||
In Russian: https://myscres.com/gregory.html
In Ukrainian: Ukrainian by Galina Miklosic: http://webhostinggeeks.com/science/gregory-umilta-ua.
In German: https://essayhilfe.de/translation/#ST-GREGORY-THE-GREAT:DE
In Dutch: http://www.highhacker.com/education#THE-EARLIEST-LIFE-OF-ST-GREGORY-THE-GREAT:NL
In Portuguese: https://bestreviewsbase.com/translations/#the-earliest-life-of-st-gregory-the-great:PT


THE EARLIEST LIFE OF ST GREGORY THE GREAT

rancis Aidan Gasquet, OSB, published an edition of a manuscript, giving the earliest Life of St Gregory the Great , which he had found in the Benedictine Abbey of St Gall, Switzerland, MS. 567, titling it Vita Beatissimi Papae Gregorii Magni Antiquissima , in 1904 (its manuscript title is 'Liber beati et laudabili viri Gregorii pape urbis Rome de vita atque virtutibus' ). That printed volume was found, fittingly, in St Hilda's Priory Library of the Anglican Order of the Holy Paraclete and I thank them for their hospitality and their encouragement for this work. Later, I discussed it with Father Leonard Boyle, O.P., then Prefect of the Vatican Library, when he was noting manuscripts from early medieval England as often having Latin scansion marks carefully included for non-native readers of their Latin. The manuscript's text had originally been written out at Streoneshalch, today, Whitby , in A.D. 713. The Venerable Bede was to make much use of it for his later History of the English Church and People (III.1, IV.23, etc.). Cardinal Gasquet believed the Vita Antiquissimi was first written by a monk of Whitby, though we cannot rule out that it may have been written by a Whitby nun at that double monastery, for in Hilda's day women could be equally as learned as were men - or more so, having introduced to them Christian Latin literacy in place of the men's pagan Germanic runes, and converted them. However, a credible candidate for the text would be the Whitby-educated Bishop Oftfor, who devoted himself to reading and applying the Scriptures in both Hilda's monasteries, then travelled to Kent to visit and study with Archbishop Theodore, next travelling to Rome, returning to become Bishop of the Hwiccas, then ruled by King Osric (Bede, History of the English Church and People , IV.23). The episodes the text gives concerning English history clearly influenced Bede, and those of Italian history would later be retold in the poetry of Dante Alighieri , Elizabeth Barrett Browning , and Emily Dickinson. If any of the readers of this booklet would care to translate it and to correct this present poor work for the benefit of others who need the text in English, their improved and fuller translation would be used and most gratefully acknowledged. 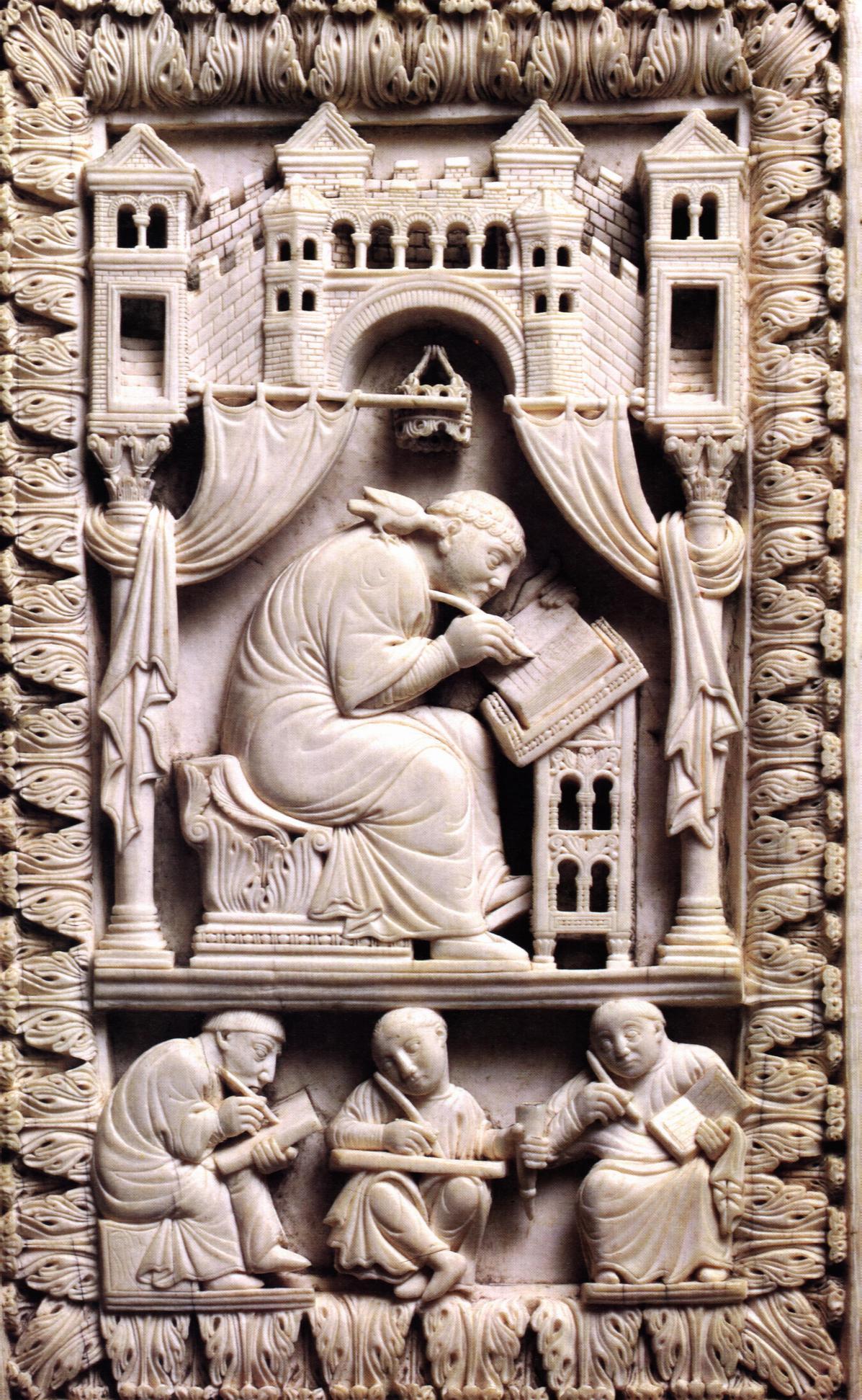 [The text opens by speaking of the fame of holy Gregory, next of how he was a Roman, his parents being called Gordian and Sylvia, and how he was sent as an envoy to Constantinople where he deeply grieved the loss of his monastic cloister and sought the 'sign of Jonah '. Throughout, scriptural quotations are used and also passages from the writings of St Jerome . The account that follows is later to be used by Bede in his History of the English Church and People (II.1).]

Therefore to tell truly, it was before his pontificate, when there came to Rome some of our nation who were fair of form having blond curls. Those with him heard that they had come, now saw how he delighted in seeing them . . . . He questioned them as to whose people they were . . . . When they replied: 'We are those who are spoken of as Angles', he said, 'You are angels of God'. Then he said: 'What is the name of the king of these people'. And they said: 'Aelle', and he said: 'Alleluia, for God ought now to be praised. What is the tribe's name to which you belong?' And they said: 'Deira'. And he said: 'They shall flee from the wrath of God (De ira) to faith'.

[Gregory wished to undertake the missionary journey himself but was unable to do so as at that time the Roman people revolted. When Pope Benedict died, Gregory was elected Pope, and so sent Augustine, Mellitus and Laurence instead.]

Through these therefore the first king of all the Angles, King Ethelbert of Kent, was brought to the Christian faith, and was baptised with all his nation.

[The Whitby writer gives a further and lengthy paragraph on Gregory's puns upon Angles and angels, Aelle and Alleluia, citing John in the Apocalypse, and the Gospels. Then he gives the baptism of Edwin and of the members of his family by Paulinus at York (influencing Bede, History of the English Church and People, II. 14).]

After that, amongst our people, who are called Northumbrians, was Edwin, son of the before mentioned Aelle, of whom it was prophesied that he would not be unworthy of singing divine Alleluias, a king taught with such singular wisdom, who reigned over the above mentioned land, at the time that the English people had invaded this island.

[Later, Edwin is driven into exile, where he has a vision of Christ who appears to him crowned and who consoles him, promising him a prosperous reign if he will obey him. After this Paulinus dies, and is seen to ascend to heaven in the form of a fair white swan. The bones of King Edwin are commanded in a vision to be brought from Hatfield to Streanaeschalch, where is the convent 'quod est coenobium famosissimum', of Edwin's great-granddaughter, 'adhuc in vita monastica vivente Aeonfleda filia religiosi regis prefati Eduini . . . femina valde iam religosa '. This is done.

The Whitby writer next gives miracles concerning Pope Gregory, two of them involving women. In the first we learn about the manner of Communion in the early medieval Roman church, the communicants still bringing their own bread for the rite. ]

XX. The Miracle of the Bread

And when she came to communicate from the hand of the man of God and hearing him say, The Body of Our Lord Jesus Christ preserve your soul, she smiled. Which, the man of the Lord seeing, he closed his hand over her mouth and, not wishing to give her the holy body of the Lord, placed it on the altar . . . . The Mass having been completed, calling her, he asked why she had smiled when she ought to have communicated. She replied, saying, That very bread I made with my own hands, and you said of it that it was the body of the Lord.

[In order to undo her incredulity he prayed, then showed her the bread which he had placed upon the altar, which was bleeding, quoting to her John 6.54 and 57, and, after the entire congregation had prayed for her faith, he communicated her.

The text next gives further miracles, then discusses St Gregory's writings, his Sermons, his teaching concerning the Angels, his commentary to Ezekiel, dictated by a white dove, his Moralia in Job and Dialogues, XXIV-XXVII.

Then the writer gives the story of the Miracle of the Salvation of Trajan.]

XXIX. The Miracle of  Trajan and the Widow

And here we narrate somewhat of the tears of Roman Saint Gregory restoring the soul of the Emperor Trajan and baptizing it, which is marvelous to say and hear. . . . Now one day when he was going through Trajan's Forum . . . he thought about the work of mercy the pagan had performed, which seemed to him more Christian than pagan. For as he was leading his army forth to fight against the enemy, he was softened by the voice of a widow pleading for mercy, halting the Emperor of the whole world. For she said, 'Lord Trajan, here are men who have killed my son, who will not render me justice'. He replied, 'When I return, speak to me, and I will render justice to you'. And she, 'Lord, and if you do not return, there is none to help me'. Then he acquiesced to the judgement, and from the midst of the bronze armour put together the money that was owed. Thus, St Gregory concluded, he who had not known the passage, Judge the orphan and defend the widow and come and reason together, said the Lord (Isaiah 1.16-17), had done it. And weeping, he entered St Peter's . . .

Dante uses this episode in Purgatorio X, showing the scene sculpted upon the marble wall of the gallery beside the Annunciation to Mary. Botticelli and many other artists illuminated the scene from Dante's text. Langland uses the figure of Trajan as the virtuous pagan in Piers Plowman. The Pearl Poet, in St Erkenwald, combines this story with others from Bede's History of the English Church and People and Geoffrey of Monmouth's History of the Kings of Britain, to create a similar one whose setting is St Paul's Cathedral in London. Elizabeth Barrett Browning puts the scene of Trajan and the Widow into Aurora Leigh, setting it on the Appian Way rather than in Trajan's Forum, and Emily Dickinson borrows her lines for 'A Soul Selects her Own Society', to describe an emperor kneeling before her low grave.

Thus a monk or nun at Whitby, writing this tale in the eighth century, influenced further writings, in Europe and in America, from the fourteenth through the nineteenth centuries. Most important, he, or she, is Bede's predecessor and thus a source for the History of the English Church and People, as well as a source for Dante Alighieri's Divina Commedia. He or she helped shape the histories of not one but two nations.