You can search within this Umilta website about Julian of Norwich, about the Roma on Oliveleaf, etc., using the engine below: 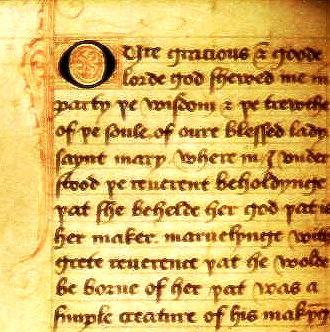 Opening of Westminster Cathedral Manuscript of Julian of Norwich's Showing of Love
For Advent, http://www.umilta.net/sophia.html

http://www.ringofgold.eu/Xanadu.html Proposal to the European Union

We suggest your opening two or three of these simultaneously for an intriguing effect, mixing together speech and music, like a medieval motet, that you create. Re-call this page in your browser, while reducing each .mp3 file, these continuing to play polyphonally as background to the visual text. At first books were written out by hand, in manuscript, often gold-leafed as well as rainbow-coloured, and were read aloud and chanted from. Then they became black and white printed books, read silently in intellectual loneliness. Now they can be the sensuous luminous and harmonious pages, with colour again, and with song, with voice, through the new/old technologies of alphabet and number, the zeros and ones, of our computers, of our information society. With the new technology we return writing to the recording of human speech that it really is, an earlier technology, from merely the letters and the silent eye to the sounding voice and the ear as well. With thanks to Godfriends Julie and Ilya in Oxford and to my cousin Robin in Canada.

For the Mediatheca 'Fioretta Mazzei' library holdings on Julian of Norwich and other contemplatives, see http://www.florin.ms/libgimel.html. The library is housed in Florence at the 'English' Cemetery, P.le Donatello, 38, 50132 FIRENZE, ITALY, and one may become a member and reader through the gift to it of a book a year. 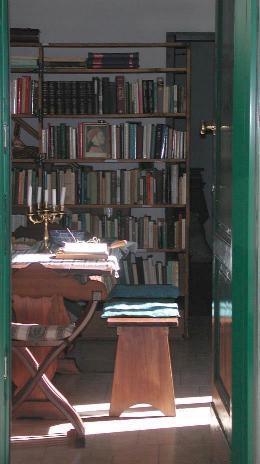 {In the early Middle Ages, the first two thirds of Christianity, in monasteries and convents, women could be equally learned as were men. These were Schools for Prayer, living the Word of God, the Gospel, the Bible. In the Twelfth Century, in Paris, the pagan Greco-Arabic model of the university was subverted and adopted by the Church. From its lecture halls, where theology now came to be taught to authorized specialists, women were rigorously excluded, only finding their way back partially into the world of learning in our past century. Likewise with this learning, minds became abstracted and divorced from soul and from body, from the family, from women and children, concentrating upon the intellect only, out of harmony and balance to flesh and blood reality, to Creation. In this website, crafted by both men and women, and also by their children, shall be presented a wealth of learning for men and women and children, culled through time from spiritual, rather than temporal, sources, from collaborative, not competitive, communities. Imagine this composite website as your monastic library, your scriptorium, within your anchorhold, to read in prayerful contemplation. Wisdom, God's Daughter, says:

{The Lord created me at the beginning of his work. The first of his acts of old. Ages ago I was set up, at the first, before the beginning of the earth  . . . When he established the heavens I was there, when he drew a circle on the face of the deep. When he made firm the skies above, when he established the fountains of the deep.  When he assigned to the sea its limits, so that the waters might not transgress his command, when he marked out the foundations of the earth, Then I was beside him, like a master workman, and I was daily his delight,  Rejoicing before him always, rejoicing in his inhabited world .

And of her it is said:

{Although she is but one, she can do all things, and while remaining in herself, she renews all things; in every generation she passes into holy souls and makes them friends of God and prophets . . .  She reaches mightily from one end of the earth to the other and sweetly doth she order all things.

{For if hevene be on this erthe . and ese to any soule,
It is in cloistere or in scole . be many skilles I fynde;
For in cloistre cometh no man . to chide ne to fi3te,
But alle is buxomnesse there and bokes . to rede and to lerne.

That was likely Julian's schooling at Benedictine Carrow Priory in Norwich, continued throughout her life. In these interrelated websites we share with you her monastic library and her contexts, then and now. 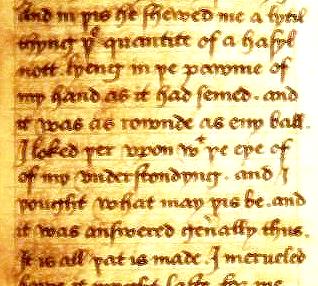 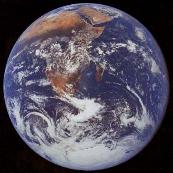 The Umilta Website, about the love of God and neighbour, is constructed as a colour-coded memory system as were medieval manuscripts, Anglo-Saxon materials in alternating reds and greens, later medieval materials in alternating reds and blues, in the latter case like pulsating umbilical cords, of the Word become flesh dwelling in our midst, oliveleaf trauma healing material being in blues and greens. Brown ink signifies a quotation from a manuscript, other text in grey signifying modern commentary. A hierarchy of scripts is used with large capitals for websites, smaller capitals for their subsets, in the titles to essays. Rather than modern technology, with counters, java, flags, we shall use an ancient simplicity in words and images, from the Age of Faith. As did Julian herself. Had she lived in our centuries, Julian would have used the Internet so. This Website, like Julian's Benedictinism, is intentionally a school of learning, a school for contemplation; yet, like Julian of Norwich's Showing of Love, it is for everyone, wherever you may be in the world, poor or rich, crippled or whole, lay or cleric, children, women, men. As Ritamary Bradley wrote in Julian's Way: A Practical Commentary on Julian of Norwich (London: Harper Collins, 1992), we are about not only the theory, but also the practice, of Julian of Norwich's Showing of Love, in all its kaleidoscopic aspects, like dew upon cobwebs sparkling amidst mist, like the Gothic traceries of Julian's Cathedral of the Holy and Undivided Trinity of Norwich.

Copying Julian, this webmistress lives as a hermit in a graveyard, though in Florence rather than Norwich. Why our English has to spill over into Italian, and even Spanish and Portuguese. We are global. We are ecumenical. We are like Teresa of Avila's Interior Castle. About spiritual riches, not ephemeral money. We encourage the parallel use of languages other than English. We encourage the learning of skills and handcrafts. We are a library about a library. We encourage you in the writing of books, of web essays, that restore meaning. The Web, like Wisdom, God's Daughter, can reach from one end of the globe to the other, sweetly ordering all things, but not in temporal or spatial linearity, instead, with hypertexting, with elaborate weaving and embroidering, with the tracery of cobwebs with dew on them, reflected in Gothic windows, arabesqueing back upon itself through time and space. In this we mirror the synapses of the human brain/mind, powered by our hearts/ lungs, charged by our souls in God's image. We seek your creative contributions.

Pope Benedict XVI speaking in Italian on Julian of Norwich at the Papal Audience, 1 December 2010 http://www.vatican.va/holy_father/benedict_xvi/audiences/2010/documents/hf_ben-xvi_aud_20101201_it.html#

Of particular use in teaching and learning even Latin with laughter at all levels: /alphabet; /playschool, /terence (Terence's Comedies, and medieval plays based on these, with engravings and manuscript illuminations); and /aucassin, the chant-fable Aucassin and Nicolete, in parallel text, English and French, with its medieval music and with contemporary illuminations, both providing material which can be performed in modern classrooms/ lecture halls.

On being a monk in the world, a hermit in the city:
/benedict, /birgitta, /burningbush, /cloister, /columban, /eremit, /eremo, /gabrielia, /julian, /soulcity 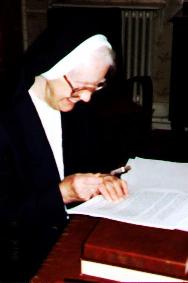 Sister Anna Maria Reynolds C.P. was the greatest editor Julian ever had. During the war years she was transcribing the extant microfilms with a microscope, a word at a time, for her Leeds University MA and Ph.D. theses. Subsequent editions are based on her meticulous work.

AUDIO-BOOKS AS DVDS AND PODCASTS OUR VIRTUAL LIBRARY INTENDS TO PUBLISH:
We embarked on creating DVDs and podcasts of Audio-Book readings. This was partly because my colleague and co-editor, Sister Anna Maria Reynolds, C.P., in Ireland became blind and we sought to record the Julian text for her. We acquired a Mac mini with ILife and a fifth generation IPod video for this work, but these became obsolete. We now record with Audacity and a Yeti microphone. I have already recorded Julian of Norwich, the Westminster Showing of Love, and also John Woolman's Plea for the Poor and Elizabeth Barrett Browning's Ballad and Sonnets, including her anti-slavery poems, for the Bicentennial of the Abolition of the Slave Trade. We plan on creating audio-books such as the following as well:

See /portfolio for hard-copy books and CDs available from this website, which publishes books to support its library, the Biblioteca e Bottega Fioretta Mazzei 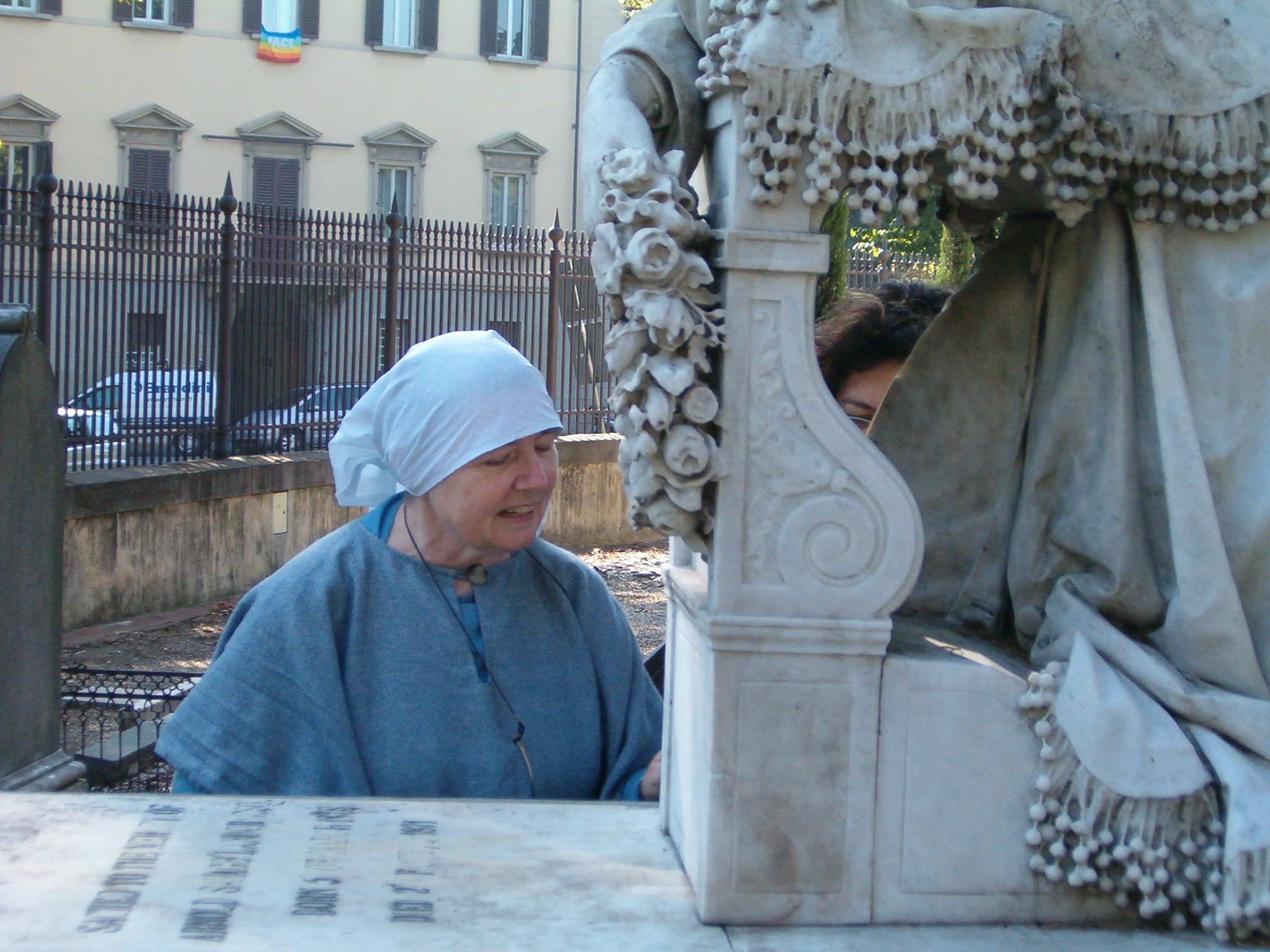 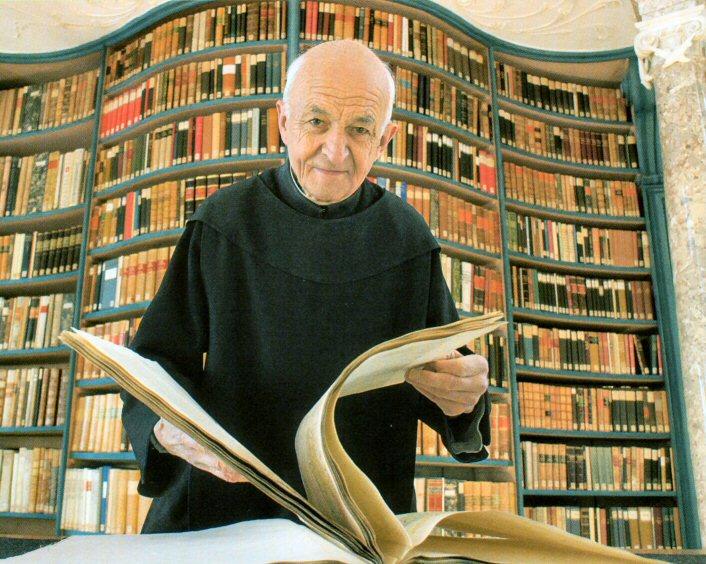 We are affiliated with Linda and Michael Falter
who make exquisite Hebrew manuscript facsimiles. 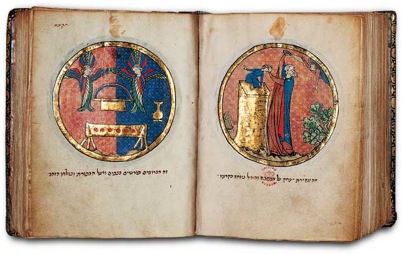 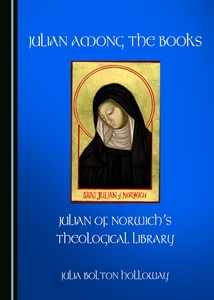 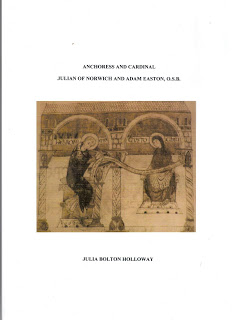 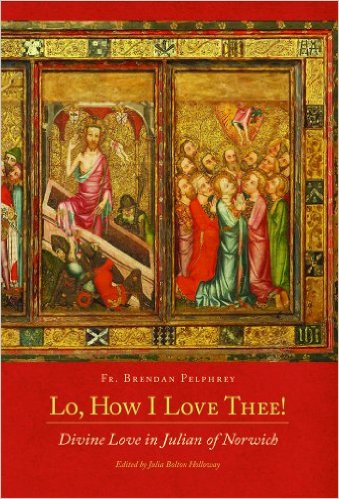 
The Definitive Edition and Translation of the Extant Julian of Norwich Showing of Love Manuscripts: 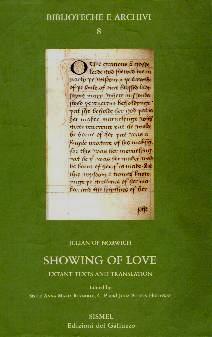 Julian of Norwich, Showing of Love: Extant Texts and Translation, ed. Sister Anna Maria Reynolds, C.P. and Julia Bolton Holloway (linen bound volume of 848 pages, with 18 plates of the manuscripts in full colour, ISBN 88-8450-095-8) from University of Florence, SISMEL Edizioni del Galluzzo  (Their price is  €191,09 [subject to change], and postage is €36.46 air mail, €21.38 surface to America), or directly from Julia Bolton Holloway [price is negotiable]. The first edition is printed in 1670 copies. Reviewed in Sapienza, Medium Aevum, Speculum, etc.


Index to this book at http://www.umilta.net/julsismelindex.html 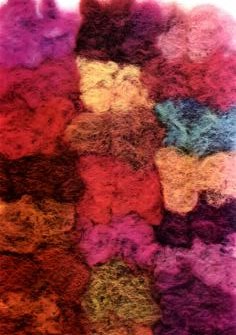 To see inside this book, where God's words are in red, Julian's in black, her editor's in grey, click here. 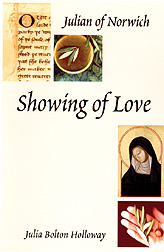 Julian of Norwich, Showing of Love, Westminster Text, translated into Modern English, set in William Morris typefont, hand bound with marbled paper end papers within vellum covers, in limited, signed edition. A similar version available in Italian translation. Can be accompanied by CD of a reading of the text. To order, click here. 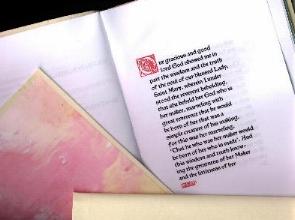 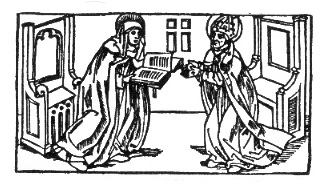 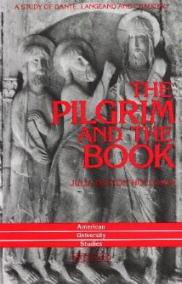 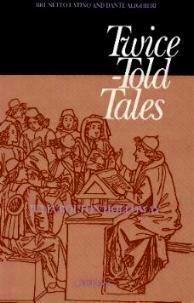 According to Google Analytics, Umilta receives 3000 visits from 52 countries, in a month. With the coming of Facebook readership lessened but our websites still receive over 4000 visitors each month from all parts of the globe: 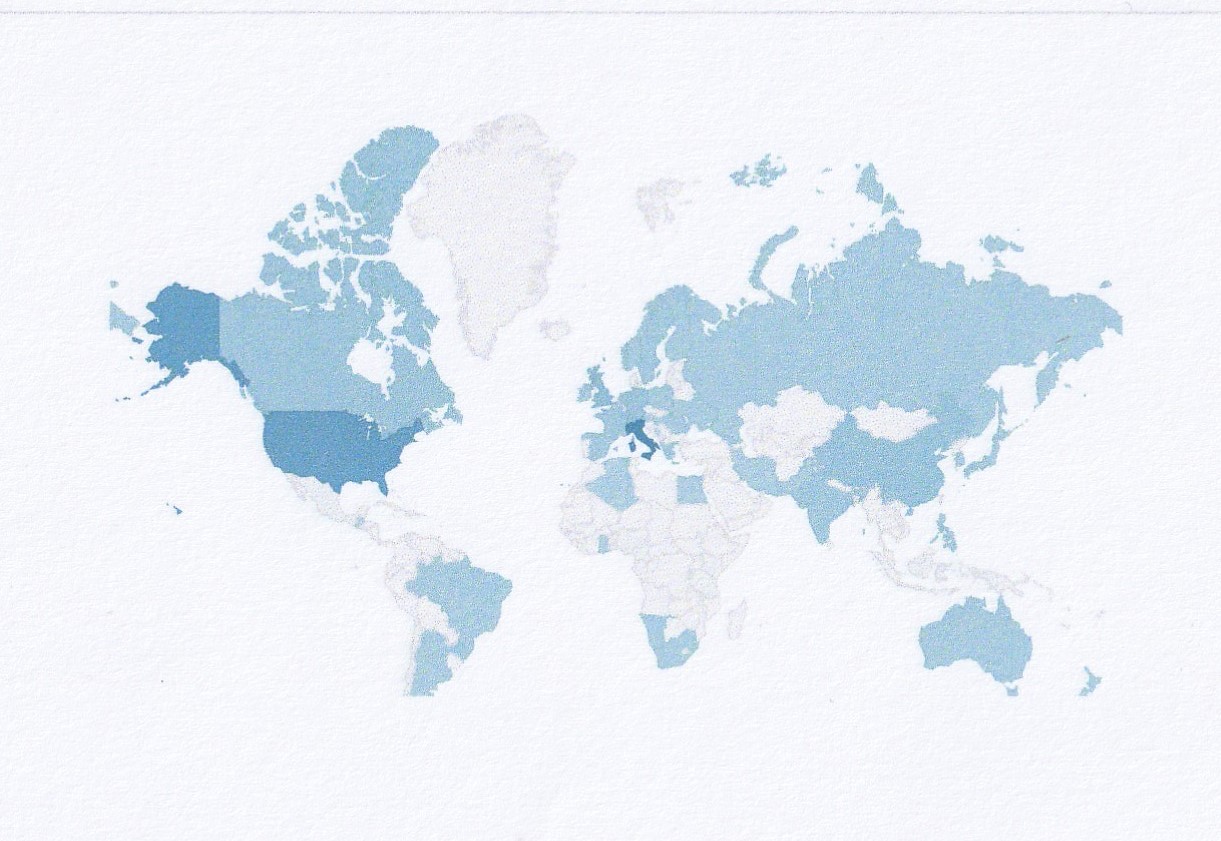