JULIAN OF NORWICH, HER SHOWING OF LOVE AND ITS CONTEXTS ©1997-2017 JULIA BOLTON HOLLOWAY  || JULIAN OF NORWICH  || SHOWING OF LOVE || HER TEXTS || HER SELF || ABOUT HER TEXTS || BEFORE JULIAN || HER CONTEMPORARIES || AFTER JULIAN || JULIAN IN OUR TIME ||  ST BIRGITTA OF SWEDEN  ||  BIBLE AND WOMEN || EQUALLY IN GOD'S IMAGE  || MIRROR OF SAINTS || BENEDICTINISM || THE CLOISTER  || ITS SCRIPTORIUM  || AMHERST MANUSCRIPT || PRAYER|| CATALOGUE AND PORTFOLIO (HANDCRAFTS, BOOKS ) || BOOK REVIEWS || BIBLIOGRAPHY ||  © The British Library, Alexandra Olsen, Julia Bolton Holloway , 1996/2017. Apply to The British Library, Picture Library, 96 Euston Road, London NW1 2DB for further reproduction of the Guthlac Roll Y.6, reproduction from this Website being prohibited by them.

HER BROTHER, HER BIOGRAPHER

he monk Thomas was born in Beverley, England. His parents both dying in his childhood, he was raised and educated by his sister Margaret, who was eleven years his senior. When he was adolescent he entered the service of Thomas of Canterbuy, going with him also to France, in their flight from persecution in England. At this time, towards 1165-1166, Thomas entered the Abbey of Froidmont in the Diocese of Beauvais, probably after the example of his patron, who took the Cistercian habit at Pontigny. Thomas gave himself ably, in the solitude of the cloister, to the cultivation of poetry. Likewise other members of Thomas of Canterbury's circle were writers, among them Nigil Wireker and John of Salisbury.

Thomas of Froidmont's sister, Margaret, after extraordinary adventures, came to find him in his monastery. Thomas, as is monastic practice, reserved publication until Margaret's death, giving the work as her Elegy. Manrique said he saw this poem in an old manuscript kept at Cîteux. He copied out interesting passages from it, letting us know of the astonishing life of Thomas' sister. In the Elegy, Margaret herself speaks in the first person narrating to us her adventures. One wonders who is the poet, the brother or the sister? She had early been involved in educating her orphan brother and is clearly literate in Latin, possessing and using a Psalter.

'When I was conceived', she says, 'my pious parents left England on pilgrimage to Jerusalem. I was carried there in my mother's womb. After several months of pilgrimage we arrived in Palestine, and I was born there, while my parents were in the process of fulfilling their vow'.

When returning to England, the pilgrims met with an adventure which Margaret tells us, more likely from the account given by her father and mother, than from her own memory of it.

'One day when we were crossing fertile land, a wolf left his carnage and came at us. My father, seeing him advance on, full of concern for his child, took to using force and guile. We were all three feeble, myself being small, my mother and the ass carrying me; fear hastened our steps, my father was intrepid; he tore off a tree branch which he dragged behind him, as if playing. Whenever the wolf would come near, my father would shake his thyrsis and the animal slunk away without harming any of us.

Margaret was still a baby when her parents returned to England.

Thomas came into the world several years following our pilgrims' return. It seems that he early lost his father and his mother, and that his sister Margaret, eleven years older than he, took care of him and brought him up, taking him to school and bringing him home.

When Thomas' education was accomplished and he had entered the Archbishop of Canterbury's service, Margaret returned to her natal country. She was in Jerusalem when it was beseiged by Saladin in 1187.

'During this seige, which lasted fifteen days, I carried out all', she said, 'of the functions of a soldier that I could. I wore a breastplate like a man; I came and went on the ramparts, with a cauldron on my head for a helmet. Though a woman, I seemed a warrior, I threw the weapon; though filled with fear, I learned to conceal my weakness. It was hot', Margaret went on to say, 'And the fighters could have no rest. I was giving the soldiers at the wall water to drink, when a stone, like a millwheel fell near me; I was hit by one of its fragments; my blood ran. But my wound quickly healed, because someone immediately brought medicine, though the scar remains. Your feastday, O St Michael, came and went sadly, without song. What could we offer in your honour, when we were so filled with fear? An unlucky treaty took me in the Holy Places into the hands of the enemy. I was taken prisoner, but on paying some guineas, I was set free. I joined a group of others likewise redeemed'.

Generous Margaret did not enjoy her freedom for long; worse trials awaited her.

'We walked', she continued, 'towards Lachis, believing we were safe. But we found ourselves amidst the enemy. I was subjected to a difficult sentence for the love of Christ, who wished me also reduced to pious servitude. But I did not give in to the torment. My inviolate faith always won the victory. I was forced to carry out humiliating tasks; I gathered stones, I chopped wood. If I refused to obey, I was beaten with rods. I endured the blows, the threats, the heat, the cold, in silence. My chains rusted from my tears. The work and the slender diet tired my limbs. The long days were boiling hot and rest was rare and brief. The day of the Virgin's Purification, which ended the term of my sorrows, was a day I'll not forget. Do you know who bought our freedom? A Tyrian, a pious, benevolent man, redeemed us. A son had just been born to him whom he had desired. His joy caused our liberty. The happy day of the Feast of the Virgin ended for me fifteen months of slavery'.

But Margaret's trials were not yet ended. We again listen to what became of her after her having received her freedom a second time.

'I drew apart', she said, 'avoiding the towns and public places. In the fear of being captured, I walked always in hiding. I was garbed only in a sack that I had worn when captive: it was short and light, without colour or warmth; it scarcely covered my nudity; it was a burden at that time not having other clothing. All I had left was a Psalter; it was my one companion in the midst of this wilderness; it was all that I possessed. A loaf of bread sustained me for five days. Hunger then forced me to have recourse to roots of plants. For five days I ate nothing that humans would use to satisfy their hunger; I lived however I could. Alone, troubled, lost, I saw nothing except solitude. I had twelve streams to cross. What to do? Would the fear of dying make me risk the danger of dying? I saw no bridge anywhere. The fords that I tried filled me with terror. I could not turn back. I feared staying there and becoming a meal to the wild beasts. Fear eventually made me bold. I crossed the first river, then I crossed them all'.

By then it was winter; despite the rigor of the season and the lightness of Margaret's garb, she was astonished at the sensation of warmth. She cried:

But here there was an even more surprising event. 'Not far away', she said, 'I saw a forest: I saw a Turk at the edge of the wood who came and snatched away my Psalter. I went away very sorrowfully; but when I had gone a distance, he called to me; he threw himself at my feet; he repented of his violence; he gave me back my book. What had caused this barbarian to submit himself to me?'

Our pilgrim finally reached Antioch. While she was staying there, the Muslim armies, which had already taken her prisoner in Jerusalem, came also before the walls of this city. This was the most dangerous moment for Margaret; someone accused her of stealing a knife that she had found. She was arrested and to be executed. This is what we gather from Manrique, who has left out several verses.

'What shall I do?' said Margaret. 'I want to escape but cannot on either side; around me are sentinels, no door is open. I'm afraid of everything, the looks, the words, of those surrounding me. I don't understand any Turkish words. Not knowing what to do, seized with the greatest sorrow, I pronounce the name of St Mary. At this name the chief of the Infidels is amazed, this faithless man become benevolent and pious, and turns towards the others. "See", he says, "She invokes Mary". He orders me to return. This order displeases the others, but I am only a little scared. I leave and give you thanks, O Virgin Mary. It is through you I was delivered at Lachis, it is through you I am again freed here. Honour and glory be to Mary!'

Margaret, escaped from this danger, returns to visit the Holy Places, and as a result of the Peace Treaty that was concluded in 1192 between Richard I and Saladin, she is able to return with the English Crusaders through Europe. She goes to St James of Compostela, then to Rome, and finally to France. We regret that Manrique says nothing more about these pilgrimages Margaret made. We know only that again she had to endure hunger and thefts.

'Arriving at the French frontier, I learned', said our pilgrim, 'that my brother had become a monk. I came to Beauvais, I learned where he was: they showed me Froidmont. I found him at last. He scarcely recognized me. I told him the name of our father, also of our mother. "My father had three children. You see in me the only daughter he had. The other brother was taken to heaven soon after baptism. Why do you hesitate any longer. It was Sybilla who gave us to the light of the day; she was our mother. Hulnon was our father". Then he believed me; we burst into tears together. I told him my adventures; my story had him break out in sighs. He exhorted me to leave the life of the world, and showed me the way to the monastic life'.

Margaret took her brother's advice, and thanks to the generosity of Louis, Count of Blois and Clermont, she entered a convent in the Diocese of Laon, called Montreuil or the Holy Face. After such a stormy life, she passed the rest of her days in peace.

This Elegy, in which one finds many leonine verses, a type of poetry much in vogue in the twelfth and thirteenth centuries, does not seem without merit, and its versification is often elegant.

The monk Thomas of Froidmont also composed a Life of St Thomas of Canterbury, and perhaps another prose work, a Liber de modo bene vivendi ad sororem for his sister Margaret, but which is usually ascribed to St Bernard of Clairvaux for his sister, or his cousin, and as such was much beloved by St Birgitta of Sweden, who carried out the same pilgrimages as had Margaret of Jerusalem, to Compostela, Rome, Jerusalem, and who owned a copy of it from Spain: now Uppsala University Library, C240, and which is also in the Amherst Manuscript immediately preceding Julian of Norwich's Showing of Love , and there called the Golden Epistle.

Thomas of Beverley died at Froidmont, at the beginning of the thirteenth century. 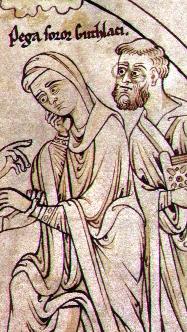 For text, translated from Latin into Middle English into Modern English, of Thomas of Froidmont's advice on how to quest perfection in a monastery given to his sister, Margaret of Jerusalem, see the The Amherst Golden Epistle.