A PARADISO DOCUMENT IN THE FLORENTINE ARCHIVES,

uried amidst account books for the Paradiso Brigittine monastery which are now housed in the Florentine State Archives is a simple but important document, testifying to the internationalism of the Brigittine movement and the importance of St Birgitta of Sweden throughout Europe/Archivio di Stato di Firenze, Monastero di Santa Brigida detto del Paradiso 79./.

The document in question was written at Vadstena in 1397; it gives the canonization bull concerning Saint Birgitta and the Saint Peter in Chains indulgence granted to Vadstena; its scribe is Johannes Johannis of Kalmar in Sweden who became a monk deacon in 1404, who was to travel to Reval in Estonia in 1407 to aid in establishing the monastery there of Mariendal, and to London in England in 1415-1416 to aid in establishing Syon Abbey, and then to Låland in Denmark in 1417 to assist in establishing Maribo /Revelationes S. Birgittae e Codice Membr. fol. 21 Bibl. Universitatis Lundensis ('Cod. Falkenberg'), ed. Elias Wessen (Hafniae: Einar Munksgaard, 1952(, p. XLV, citing Diarium Vadstenense, 29/3 1446; Liber Privilegiorum Monasterii Vadstenensi e Codice Archivi Reg. Holm A19 (olim A23) (Hafniae: Einar Munksgaard, 1950), P. XLI, XLII; British Library, Add. 22,285, Syon Martylogy, fol. 14v; Add. 24,062, fol. 150, being a letter of state concerning King Henry IV's desire to establish a Brigittine house at St Richard's Church, prior to that of Syon Abbey; Knut B. Westman, Birgitta-Studien (Uppsala: Akademiska Boktryckeriet, Edv. Berling, 1911), p. 267; John Rory Fletcher, The Story of the English Brigittines of Syon Abbey (South Brent, Devon: Syon Abbey, 1933), pp. 21-22; Edmund Colledge, 'Epistola solitarii ad reges: Alphonse of Pecha as Organizer of Birgittine and Urbanist Propaganda', Mediaeval Studies 18 (1956), p. 46; Monica Hedlund, 'Katillus Thorberni: A Syon Pioneer and His Books', Birgittiana 1 (1996), 67-87, esp. 74-75./ .

Around the time of this document's writing, in 1392-1397, monasteries were being started in Florence, the Paradiso /Giovanni Da Prato, Il Paradiso degli Alberti, 1389, ed. Alessandro Wesselofsky (Bologna: Romagnoli, 1867), Scelta di Curiosita Letterarie Inedite or Raro dal secolo XIII al XVII, 86, 4 vols, I.195-196, Boniface IX, 26 January 1392, conceding foundation of Paradiso./, and Gdansk, that of Marienbrunn, Eric Gudhmundi from Vadstena and Lucas Jacobi of Spain from Paradiso being dispatched to the later, 8 April 1397, and Henry IV of England, when he was Henry, Earl of Derby, having visited Gdansk, August 1390 and September 1392, when Marienbrunn was being founded /Tore Nyberg, Klasztor Brygidek w Gdasku i jego najwczesniejsze kontakty z krajami Skanynawskimi na przelomie XIV i XV wieku. The Brigittine Abbey of Gdansk and its Earliest Contacts with Scandinavian Countires in the Fourteenth and Fifteenth Centuries, Zapiski Historycnze 27 (1962), 530-77; also cited, M.B. Tait, 'The Brigittine Monastery of Syon (Middlesex) with Special Reference to its Monastic Usage', Phil Thesis, Oxford, 1975, p. 83./ .

Johannes Johannis Kalmarnensis died in 1446, having been born in 1363. He was professed as monk and deacon of Vadstena Abbey in 1405 /Acta Sanctorum , October 4, Vol. 50, p. 376, making use of the Diarium Vadstenense ./. Thus the 1397 Paradiso document is the earliest reference to Johannes Johannis Kalmarnensis, placing him at Vadstena in a scribal, notarial capacity and already ordained as a priest. This is after the deaths of St Birgitta's son, Birger, and her daughter, St Catherine. He would then have been thirty-four, with forty-nine more years of intensive and important service to the Brigittines before his death at eighty-three.

Clearly the document was written when the Paradiso Monastery in Florence, first proposed in 1392, was finally founded /Paradiso's Foundation was initially opposed by the Bishop of Florence who disapproved of double monasteries, but on 3 December 1397, the Brigittines won the right from the Florentine Republic to establish the Paradiso. It is possible that this document played a part in that political decision./. It was likely acquired by that monastery in order to validate St Birgitta's canonization and the indulgences granted to her Order of Saint Saviour and to St Birgitta's monasteries /A good discussion of these indulgences occurs in British Library, Harleian 2321, giving a sermon on the Pardon of Syon, noting that it is that of Saint Peter in Chains and of St Francis' Portiuncula, continuing by discussing St Birgitta's pilgrimages to the Stations of Rome and Jerusalem, and noting the Pardon of Jerusalem likewise earned by it, fols. 17v-63./. With its writer's associations with Sweden and England, Estonia and Poland, Italy and Denmark, it testifies to the internationalism of the Brigittine movement.

In the Brigittine story, trammelled about in legal, ecclesiastical, male documents, scattered all over Europe, come sudden flashes of pictures concerning women, women in childbirth, invalid nuns, the Virgin holding the Book, the saint herself who prays so often her knees become as hard as those of a camel. These are flesh and blood people enduring poverty and disease - and around them have grown beautiful written stories, embedded in the amber of a saint's canonization /André Vauchez, La Sainteté en Occident aux derniers siècles du Moyen Age; d'après les procés de canonisation et les documents hagiographiques (Rome: Ecole Française de Rome, Palais Farnese, 1981)./.

Our principal document, in which so many of these stories can be found and which has for so long been forgotten amidst account books, was previously copied out in December 1452, by Bertholdus Romanus, Confessor General of Paradiso, likely from this Vadstena/Paradiso document: 'Inveni, inquit, sed locum, ubi invenit, non exprimit, in antiquo libro' ['"I found it", he said, but the place where he found it, in an old book, he did not say']. An Altomünster monk, Jacobus Scheck, wrote that remark on finding the copy at Marien Boom, copying it out in turn there from whence it came into the pages of the Acta Sanctorum /ASS, Oct 4, 50.373./. It was also published in the magnificent Lübeck: Ghotan, 1492 edition of St Birgitta's Life and Revelationes.

This essay transcribes the original and autograph version, which is written as a small pamphlet book on twelve folio pages, measuring 222 x 160 millimeters, its written surface, 132 x 110 millimeters, using brown ink on parchment with prickings, tied together with the original hemp cord, the parchment having the typical Vadstena suede-like finish, the text having three large initial capitals ornamented in Chancery style, several marginal notations, and concluding with Johannes Johannis Kalmarnensis' notarial sign. True to the scribes of his day he uses c rather than t, for example eciam rather than etiam, and e rather than ae, for example sepe rather than saepe. 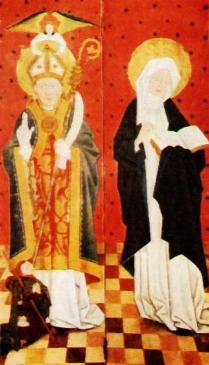 The manuscript opens with the affirmation that three Swedish ecclesiasts, Henry, Archbishop of Uppsala, Bishops Canute of Linköping /Revelationes, ed. Wessen, p. XLV, notes Diarium Vadstenense , 29/5 1404: 'Ipso die Corporis Christi . . . ingressus est Dominus Johannes Johannis Calmarnensis, consecratus per Dominum Kanutem episcopum Lyncopensem, in statum dyaconorum'./, and Thordo of Strängnäs, have read the papal documents copied here and vouch for their authenticity on the basis of their diplomatic apparatus, such as seals and silk cords of the appropriate colours. The 1391 act of canonization, issued in the name of Boniface XI, speaks of the diversity of wonderworking saints, such as martyrs, doctors, confessors, hermits, virgins and widows, who help restore the human race after the fall of the first parents. Such a saint is the holy widow Birgitta, popularly known as Brigida, whom the celestial farmer has cultivated in the farthest northern limit of his garden to be a new vine to the Church. Daughter of Birger and Sigrid, both of Swedish royal blood, her birth has been presaged by visions. Birgitta had not spoken until she was three but then did so in complete sentences. Under parental pressure she married Ulf, a prince of Närke, when she was thirteen, he, eighteen. they remained virgins for a year. Later, in one of her many childbirths, Birgitta nearly died but an imperious woman clothed in white silk entered the room and helped her to a safe delivery without further pain. The couple went on pilgrimage to Compostela, Ulf then entering a monastery and dying there in 1344. Birgitta when on pilgrimage, visiting holy relics in Germany, France, Spain, Italy and the Holy Land. She lived in Rome upon leaving Sweden. She undertook various ascetic practices, knotting hemp cords around her body /The pamphlet in which these words occur is itself tied together with a hemp cord at its gathering./ , wearing patched clothing /Her patched cloak is still preserved as a relic, Aron Andersson and Anne Marie Franzen, Birgittareliker (Stockholm: Almqvist and Wiksell, 1975), pp. 18-29, 57, figs. 17-30; likewise the remaining scraps of her handwriting in Swedish, on Sienese paper, are sewn together like patchwork and preserved, Kungl. Biblioteket, A65./, fasting more than the Church required, dropping hot wax from a burning candle on her hands and feet so that the scars would remain, keeping bitter gentian in her mouth, and kneeling so much that her knees became as hard as a camel's. She would visit the Roman Stations in all weathers and every season. She would stand unknown amongst the beggars, exchanging clothes with them. When her husband had been alive she had fed the hungry at their table, washed the feet of the poor every Friday, and founded and restored hospitals. She visited the sick, washing and binding their sores without disgust. She founded and richly endowed a monastery at Vadstena for sixty nuns and twenty-five monks. She accepted pastoral direction patiently, bore without murmur the deaths of her husband and Charles, her son. In her seventieth year, prompted by a vision, she summoned her family and died a tranquil death, commending her soul to God. Her fame spread immediately throughout the city and the world. Many miracles occurred through her intercession. Agnes de Comtessa was cured of a very large congenital throat tumour by touching Birgitta's hand at the funeral; an invalid nun of St Lawrence in Panisperna, Francesca de Sabellis, was cured after sleeping right by the grill of the convent church where the body lay in state /The iron grill still exists at St Lawrence in Panisperna, though the Poor Clare nuns have since left that convent./; Elsebi Snara, after giving birth in great sorrow to a dead child, vowed to journey to Birgitta's shrine and give a wax image if her child were to revive, the baby immediately becoming warm and breathing /For such votive offerings, see Ronald C. Finucane, Miracles and Pilgrims: Popular Beliefs in Medieval England (London: Book Club Associates, 1977), pp. 95-96/. Birgitta has given hearing to the deaf, speech to the dumb, sight to the blind, straightened curved backs and rescued shipwrecked sailors. /Much of this wording - but in Italian - is repeated in Lapo Mazzei 's Letter to Francesco Datini./ On the basis of testimony by many, including Queen Margaret of Sweden, the Pope declares Birgitta to be a saint and establishes her feast day on the day of her death, July 23. Two grants of indulgence by Pope Urban VI follow, the first giving the St Peter in Chains indulgence to the monastery at Vadstena, established by Birgitta's daughter, Catherine, the second to all monasteries founded by this Order of Saint Saviour and St Birgitta, whose official Rule is that of St Augustine. Finally, Johannes Johannis (Jön Jönsson), priest of the Diocese of Linköping, Imperial notary, confirms with his autograph colophon the authenticity of this transcription, Vadstena, 10 June 1397.

This same scribe writes out this same Bull in the Liber privilegiorum, pp. 108-118.

[On cover, folio 1] Canonizacio Sancte Brigide et indulgentie Sancti Petri ad Vincula et omnium Indulgenciarum ordinis Sancti augustini. CCVIIII /This number, 209, written in a different hand than is the rest of the document and appears to indicate a file number at a later date./.