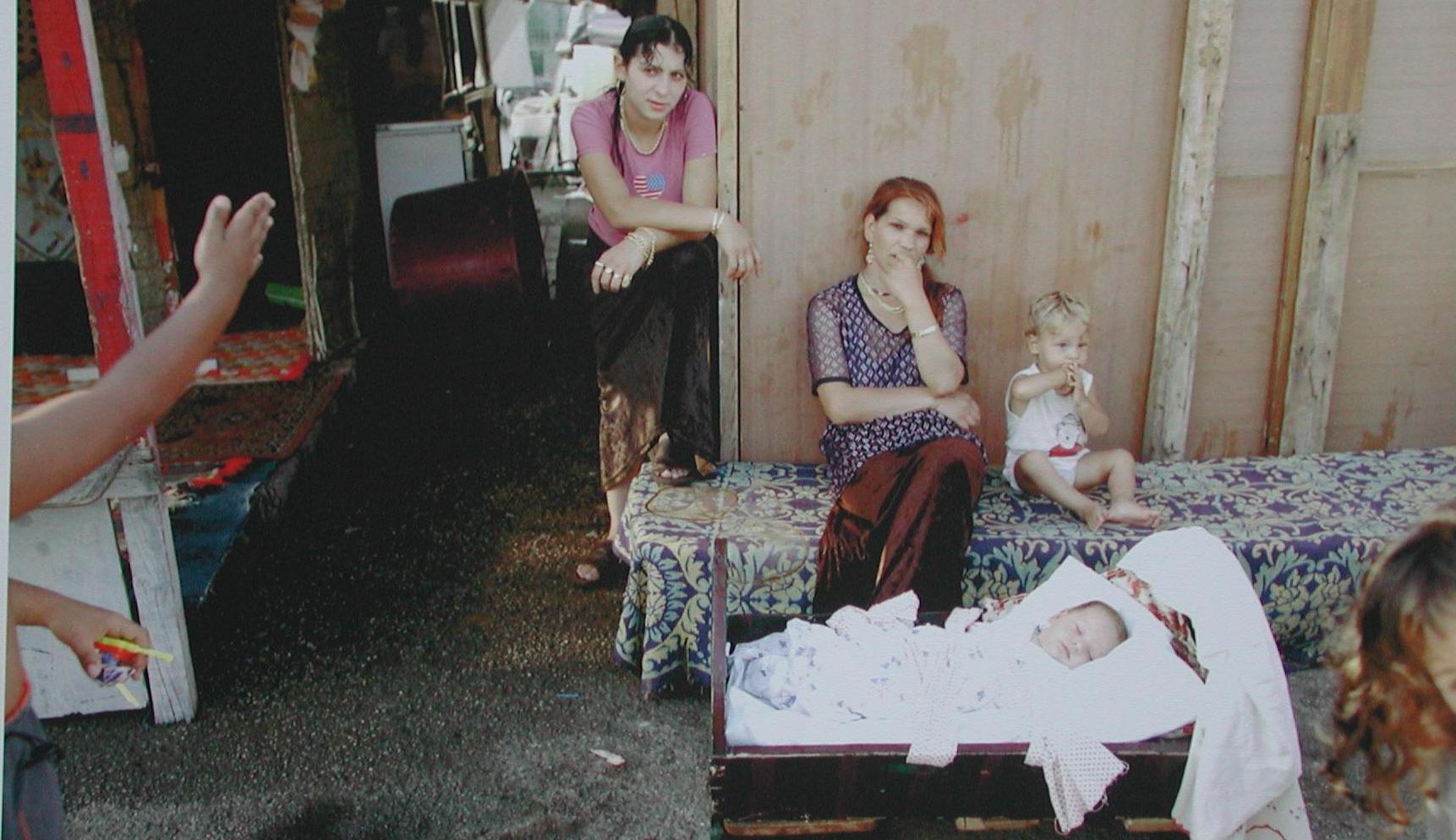 I have learned a precious humnaity in this culture. I learned from the rom much about tenderness, devotion and survival. My photographs are available to the public, a percentage of what I recieve going to my Rom friends who work hard to protect that families, their culture and to have a dwelling in this world.

The Rom flag is blue for the sky, green for the earth, with the red wagon wheel. They came from India to Europe in the Middle Ages, and their flag is taken from that for India. They have no state, no frontiers, no army. 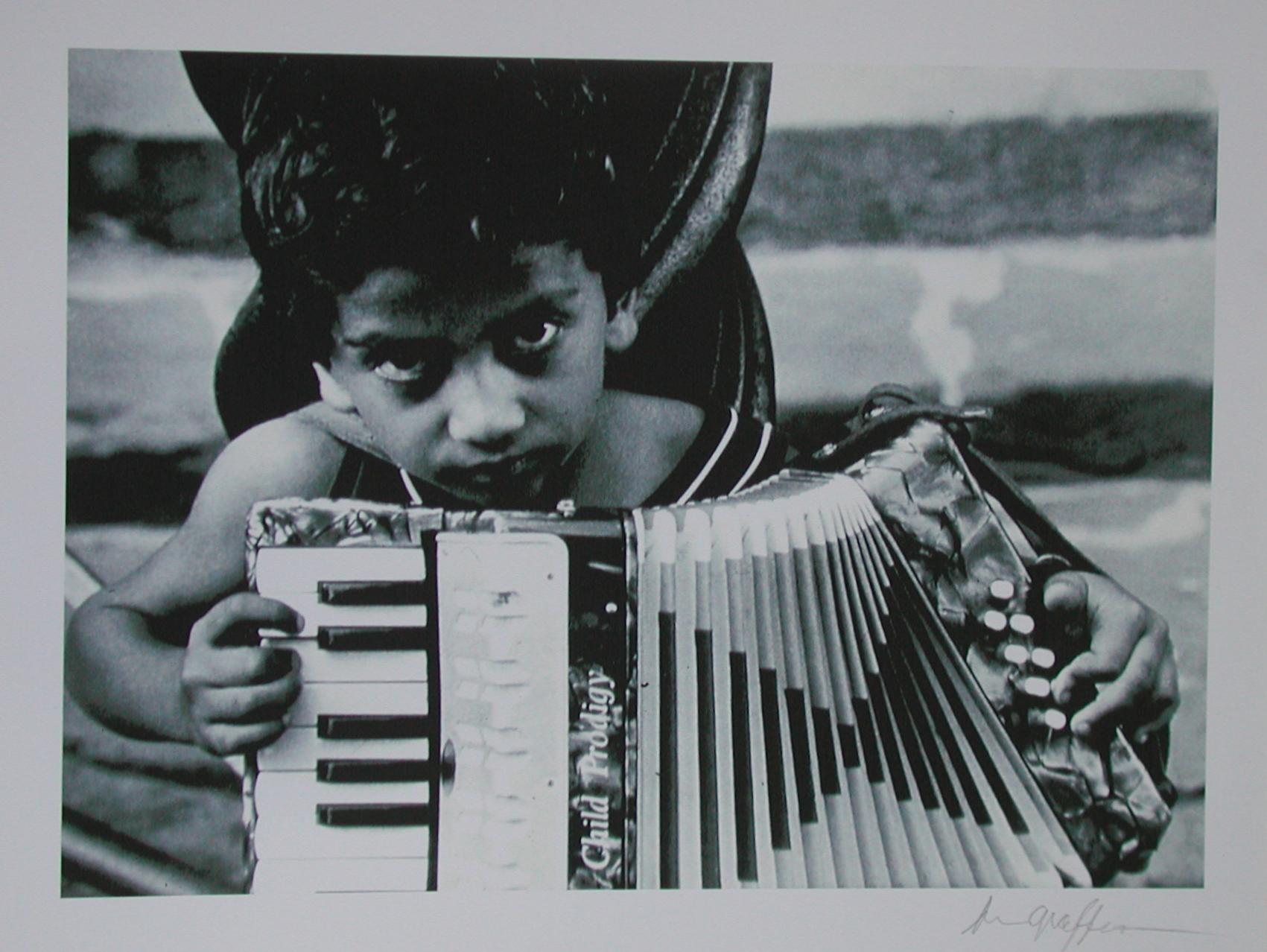 LET US NOW PRAISE THE ROM

Since 1999 I have been visiting with various groups of Roma (Rom, Gypsies), and documenting their culture inside refugee encampments, caravans, slums and public housing projects in Italy.  I want the work to portray the warm humanity and courage of the Roma peoples, Europe's largest minority. I am aware of many problems and challenges they face, The first time I heard the traditional Roma music I heard the canto hondo (the deep song). I had a longing to go to the source of the powerful music and to know something of its people. I was born in South Mississippi and I realized a shock of recognition between the canto hondo and the blue and fa-so-la shaped note gospel singing from my childhood church. In 1999, I borrowed money and time to travel to learn more about the music and culture of the Roma. I admit, I did not know what I was doing or how to begin. Miraculously, I was invited into a Roma refugee campo (encampment) near Bologna, Italy. I have been educated in life now and transformed in ways I never could have anticipated. These photographs are a testament to the generosity and tolerance of the Roma who welcomed me.

I admire the tender, raw honesty of Walker Evans' and James Agee's documentary Let Us Now Praise Famous Men. Their work, which focuses on sharecropper families in the Deep South during the great depression, set a standard of intimacy that I wished for my stay with the Roma families. Similar to Evans and Agee, I did not go into Roma culture as a journalist or privileged tourist, and I had no idea if I would be accepted. Since I was unskilled at languages, my camera was my empty begging bowl and these many families have been most generous in teaching me over the years about their culture. I was first so honored with an invitation into Campo de Santa Caterina, an encampment of Khorakhane (the way of the Koran) Roma in Bologna, Italy in 1999.  My visits there taught me much about their lives and about survival. At that time there was an effort to smuggle in Roma refugees from Kossovo and Bosnia and during my visits refugees would arrive weekly and begin building baracche (huts). And it was tense for them, because without proper passports and documents, they were so vulnerable and had to hide their status and location.

The Roma are survivors and brilliant cultural mediators. They maintain ancient traditions, their language which is similar to Hindi or Sanskrit, their stories, music, while resettling into cultures and countries with very different beliefs and practices. There is often a clash as they enter a new culture. The Roma has never had a nation, yet they maintain their identity as an ethnic group with a distinct culture.

The photographs depict daily life inside various campi (encampments). The first, Campo di Santa Caterina, was small, with approximately 40 families. Anna Lukaci and her husband Suald, let me visit in their baracca inside this encampment. On April 3, 2000 a fire destroyed their baracca and killed both of their children, a toddler named Amanda and a baby named Alex. I have returned many times since this tragedy and it is Anna's spirit and will to survive that motivates me to continue this documentary. I have seen the power of her courage to embrace all aspects of life. I see other Roma refugee women who must carry terrific responsabilities. I hope that this work will create awareness and proceeds to help with the preservation of this unique culture.

After the tragic fire, I became reunited with Anna's family inside Poderaccio, a 200 family Khorakhane campo, outside Florence, Italy.   Poderaccio figures prominently in my work, primarily because most of the families are Roma refugees. Not all Roma are refugees, but in Poderaccio many have fled countries where there is violence or genocide. It is no longer possible for Roma to be nomadic as it is difficult to cross borders and to obtain political asylum. It is even more difficult for them to obtain documents to allow them to seek work. I am seeing now cooperation between the Roma and brave activists in Italy who negotiate for the safety and rights of the Roma.

In Poderaccio there is a spiritual leader, an Imam; he is Sufi, a mystic Muslim. In the traditional practice of the religion, it is not permitted to make a photograph containing a human representation. I am careful to honor and to be prepared when I am given his permission to use my camera. I am invited to read and write with his family and children and, given my status as a western woman, I was especially honored when he invited me to enter the mosque, in a baracca in the center of the encampment. The photographs I make inside this community are more formal than those made in Campo di Santa Caterina because I must seek permission and it is more complicated and risky to make a photograph. Many families now want to be photographed; it has taken years to build this relationship and trust. An outsider could easily be a journalist or undercover agent so feared by undocumented refugees. At each camp there is even a check point carefully guarded by Roma, it is impossible to enter without their invitation and trust. I am not allowed to tell the names of the location of some images I have made.

In August 2004, Poderaccio was destroyed by bulldozers and the families were scattered. When a camp becomes too large there is often desperation and problems beyond the control and influence of the Imam of the camp or the Italian government. The Italian government tries to offer some relocation for these families, but it is overwhelming and there are many problems and difficult issues. The Commune in Firenze built wonderful wooden houses for some of the families that were so long in Poderaccio. I also see now many families from this camp who live in public housing and some that are totally homeless like the many Roma refugees arriving from Romania. These are Romanian Orthodox rather than Muslim. I hope to do more to document the unique lifestyle and issues facing the Roma from Eastern Europe that are arriving in Italy.

This work has changed in technique over the years. I began this project with quite limited equipment and funding. I had only one 35mm camera. So I photographed with that camera using black and white film that was sensitive in low light. I did not want to be mistaken as a journalist, an expert, or an immigration agent, so my unpretentious equipment was perfect for the intimate moments that I was living and documenting. Many of the images made in 1999 and 2000 are hand colored silver prints. I wanted to make the grainy images made with 3200 film more detailed and to portray the wonderful colors in the dress and homes in the camps. To be quite honest, I was proud of my printing skills and thought that the black and white images were good for that type of film. But, upon returning to the camps with photographs as gifts for the families, I learned that they thought the black and white images were somber and resembled the images commonly found on Italian tombs. This highly motivated my hand coloring of the black and white images.

So this documentary is truly a collaboration . I hope my work is an opportunity for the Roma to present their own lives without the restraints of the mythologies and projections from society. In late 2000 I purchased a medium format camera which has allowed me to make higher resolution images and to print the photographs at a larger scale. As the families are now used to me, the larger camera is neither intimidating nor suspicious, and I am now able to present the Roma more life-size. There are so many myths about the Roma and so many fantasies about what it is to be "Gypsy". I hope the work continues to show the truth, tenderness, fierceness and splendid contradictions of this culture of brilliant survivors. 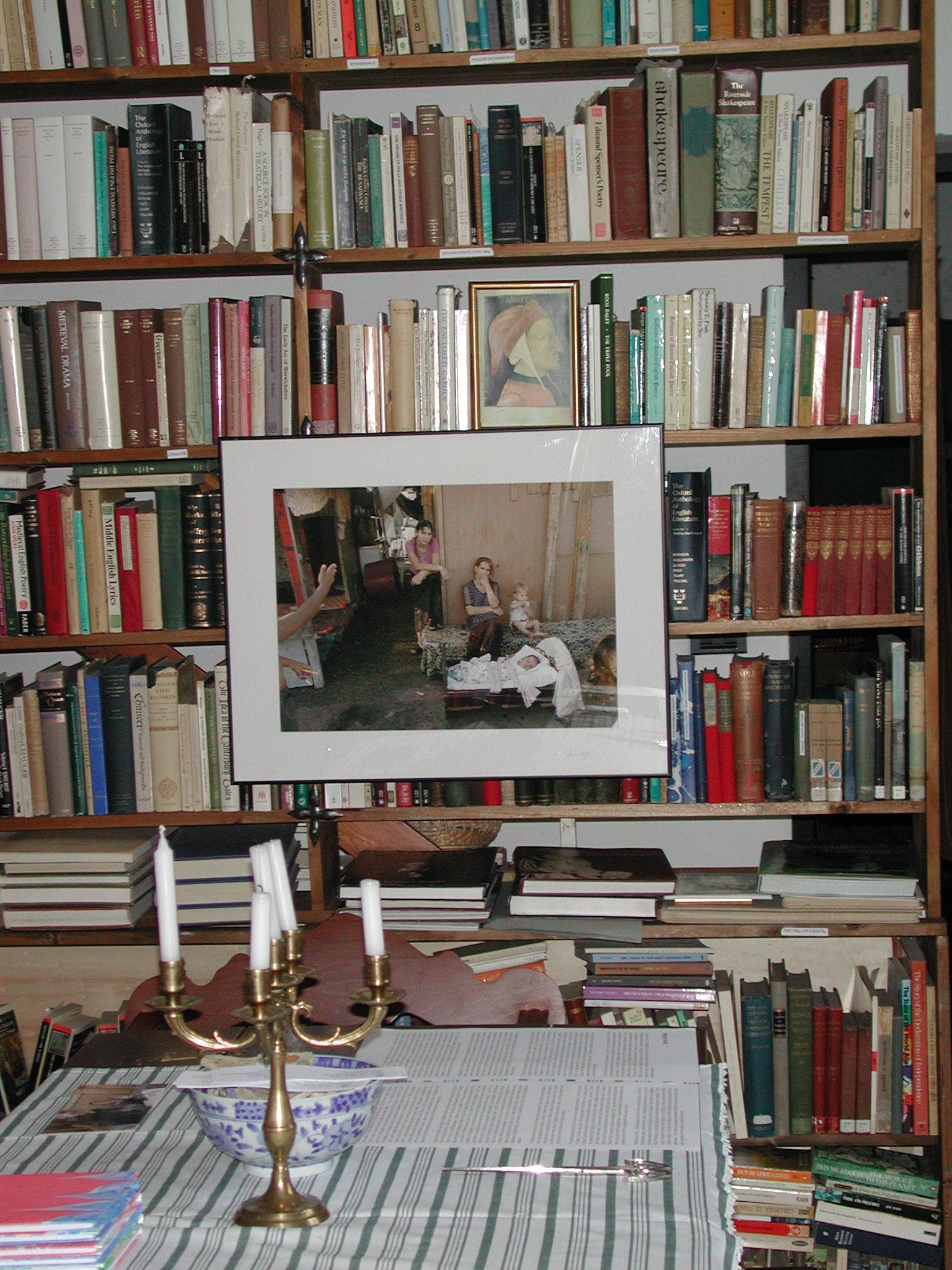 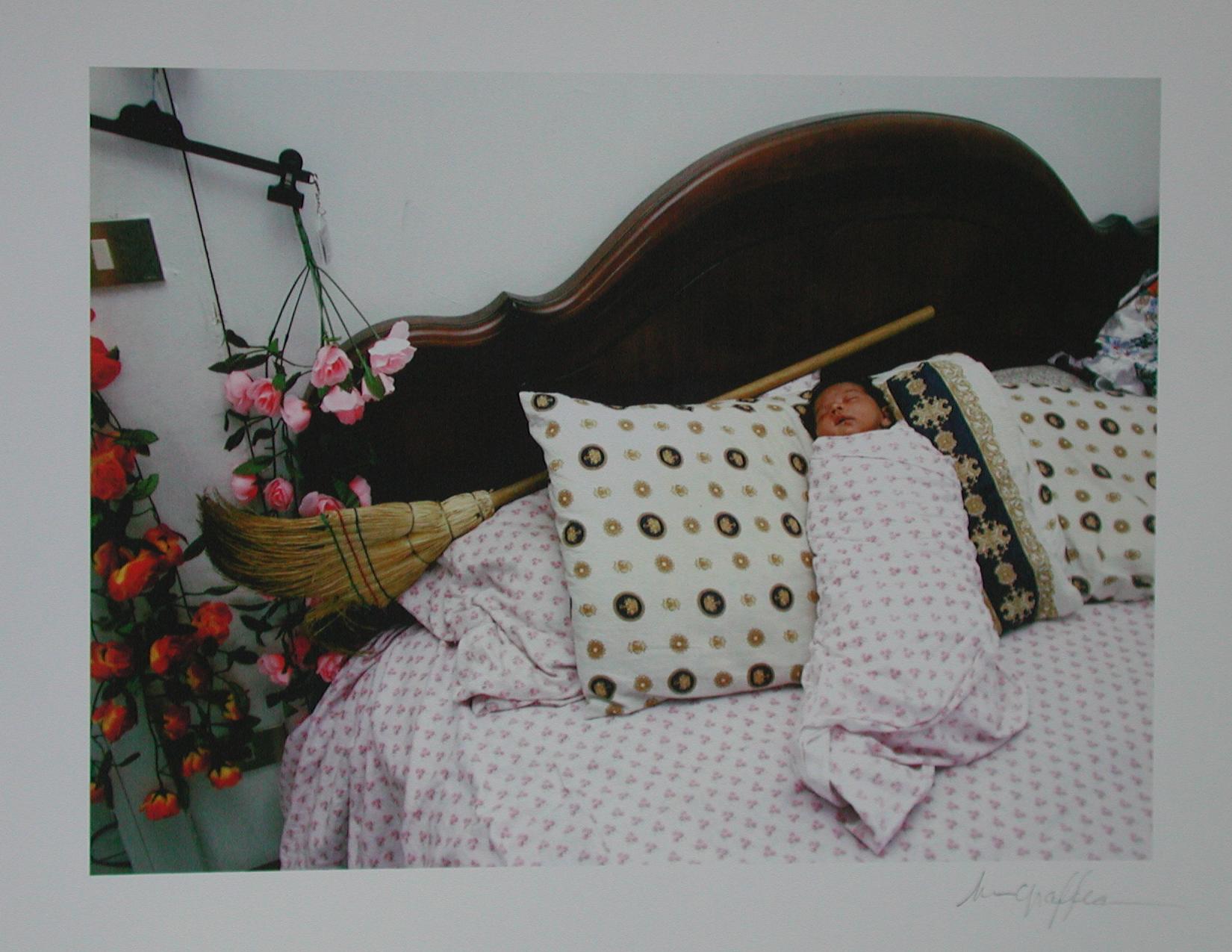 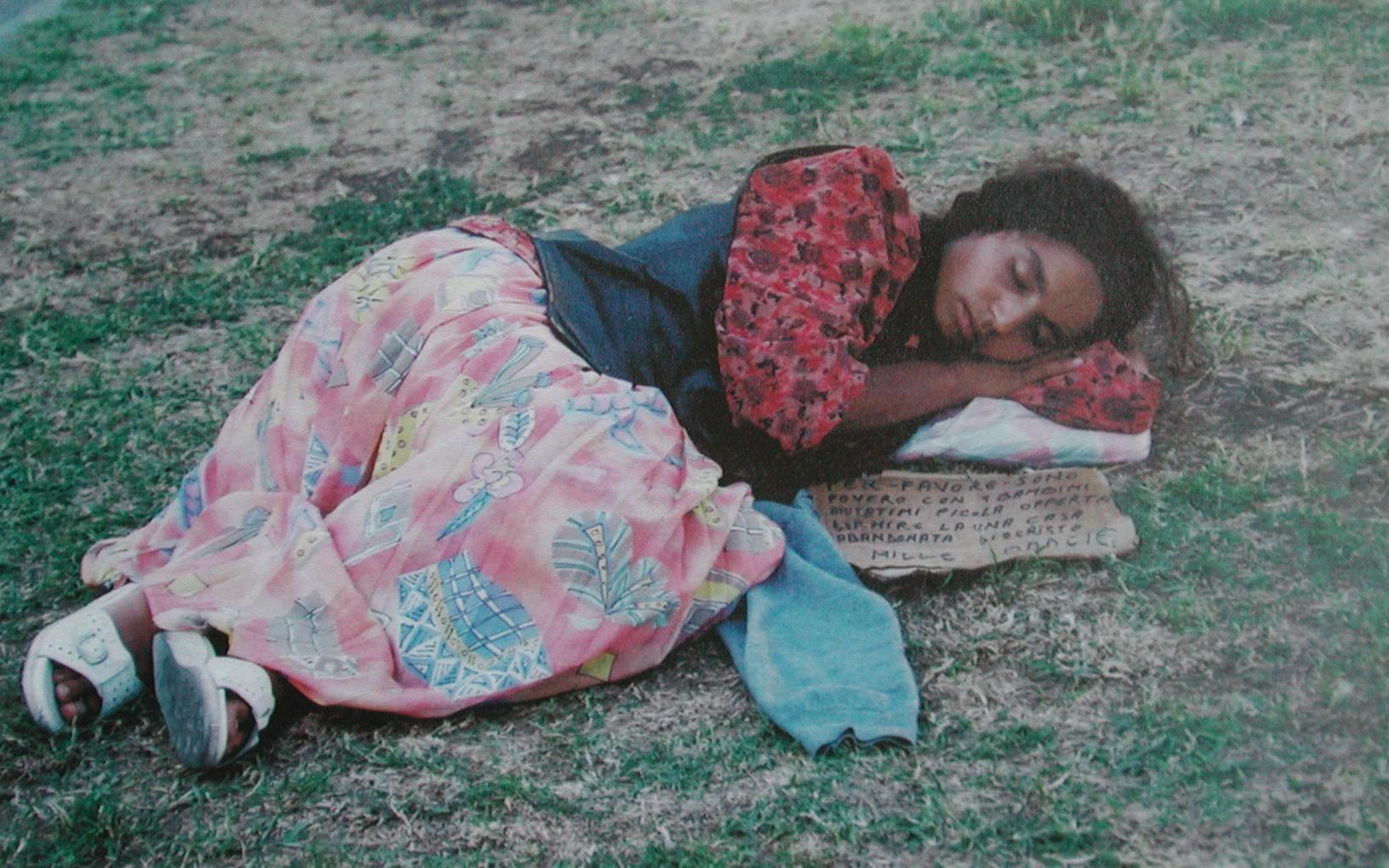 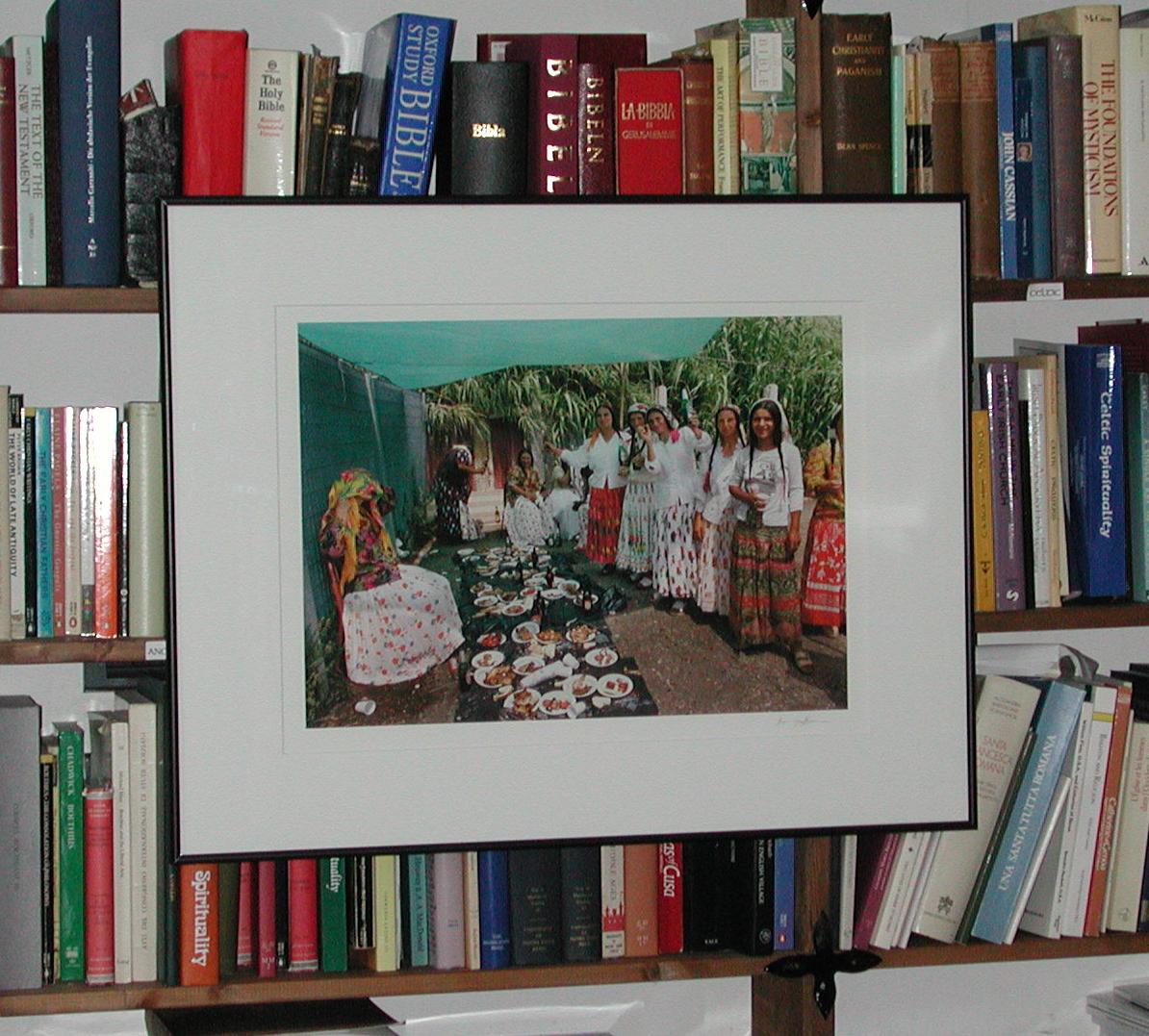 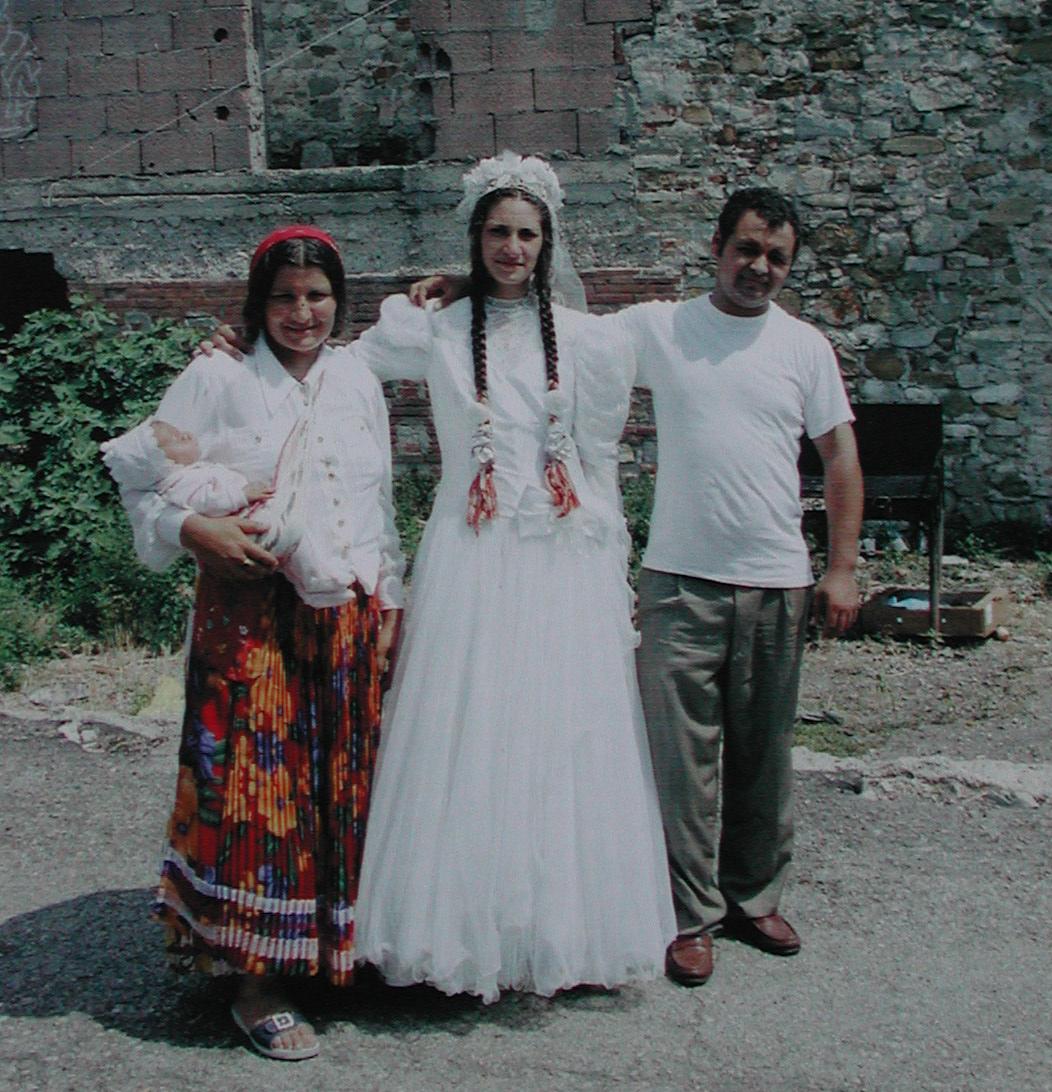 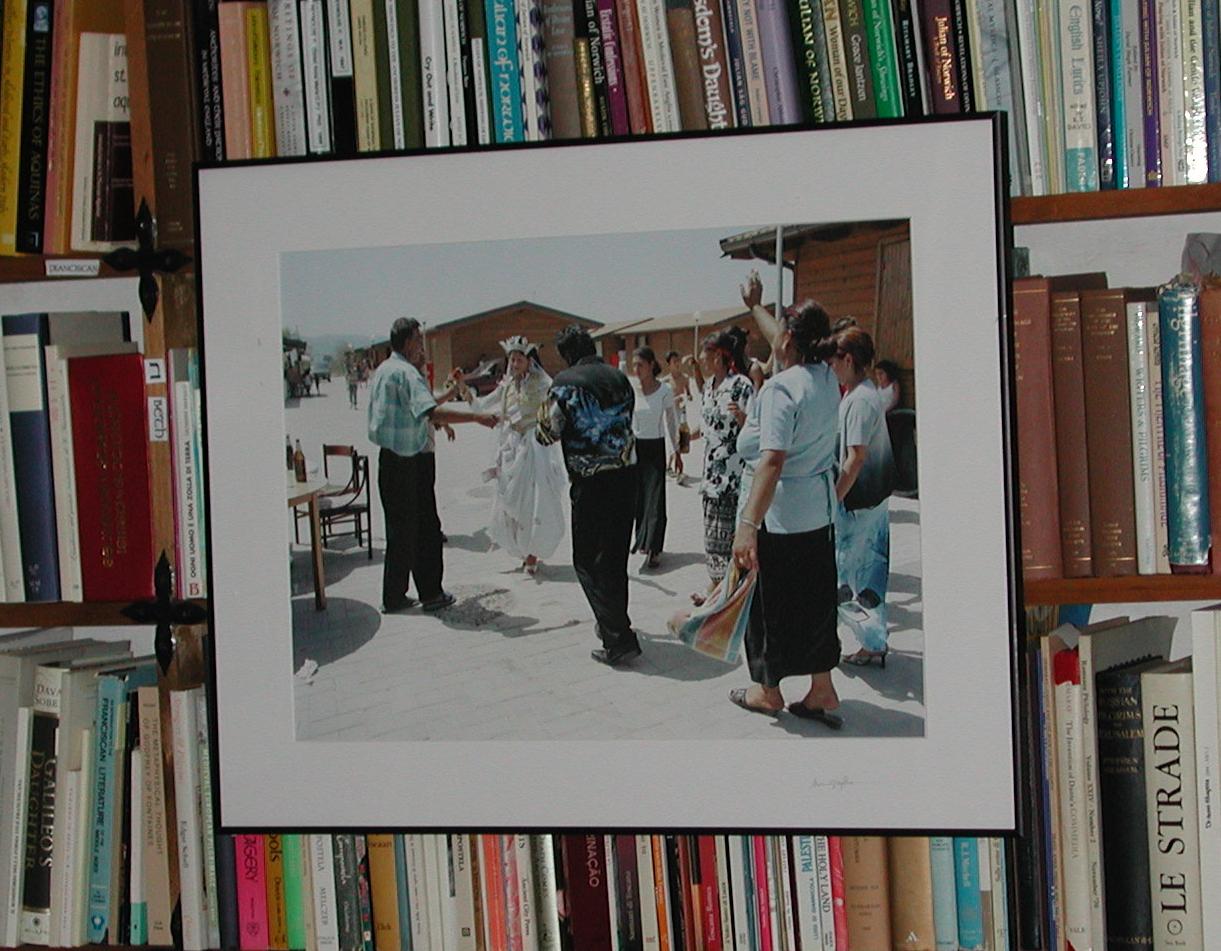 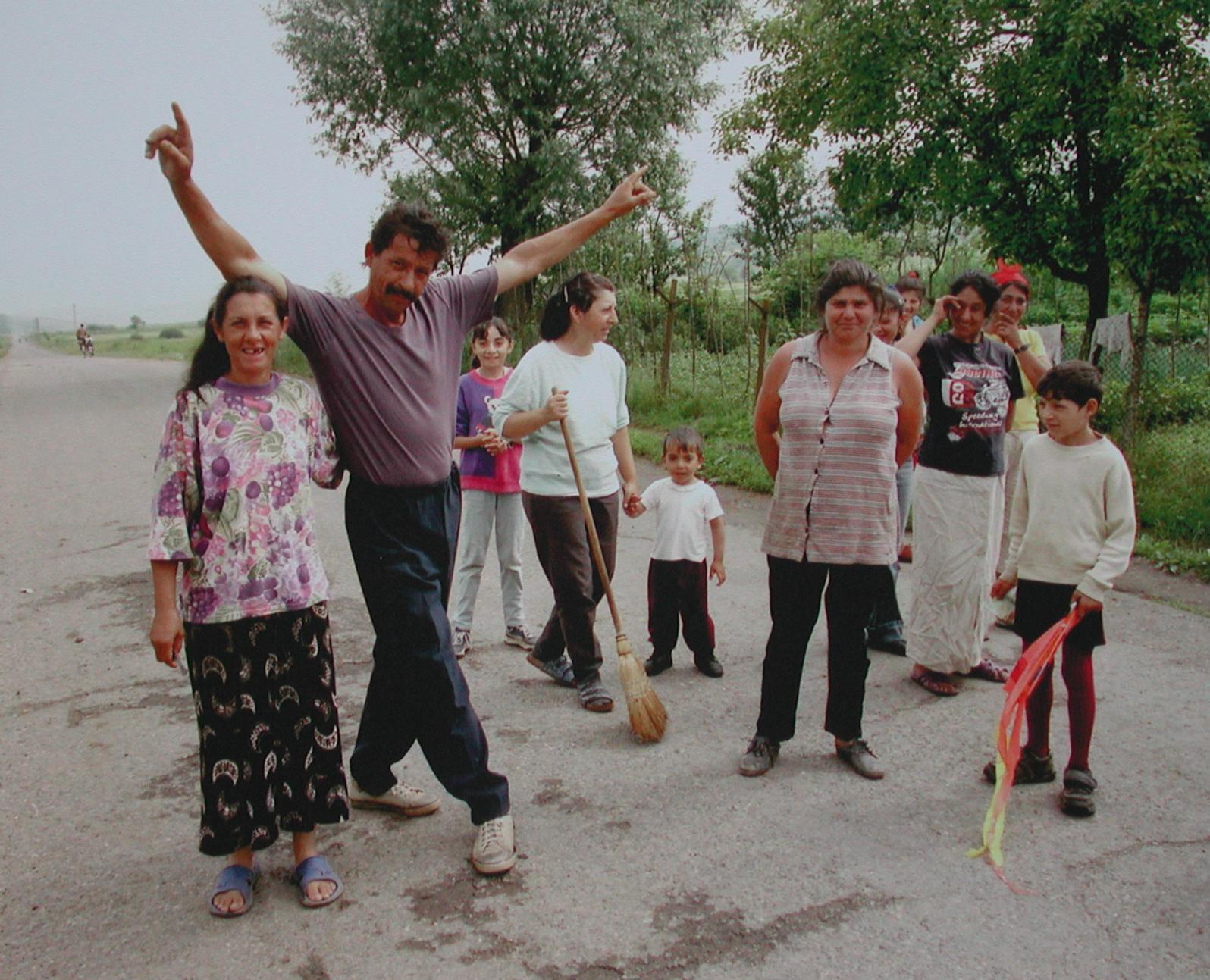 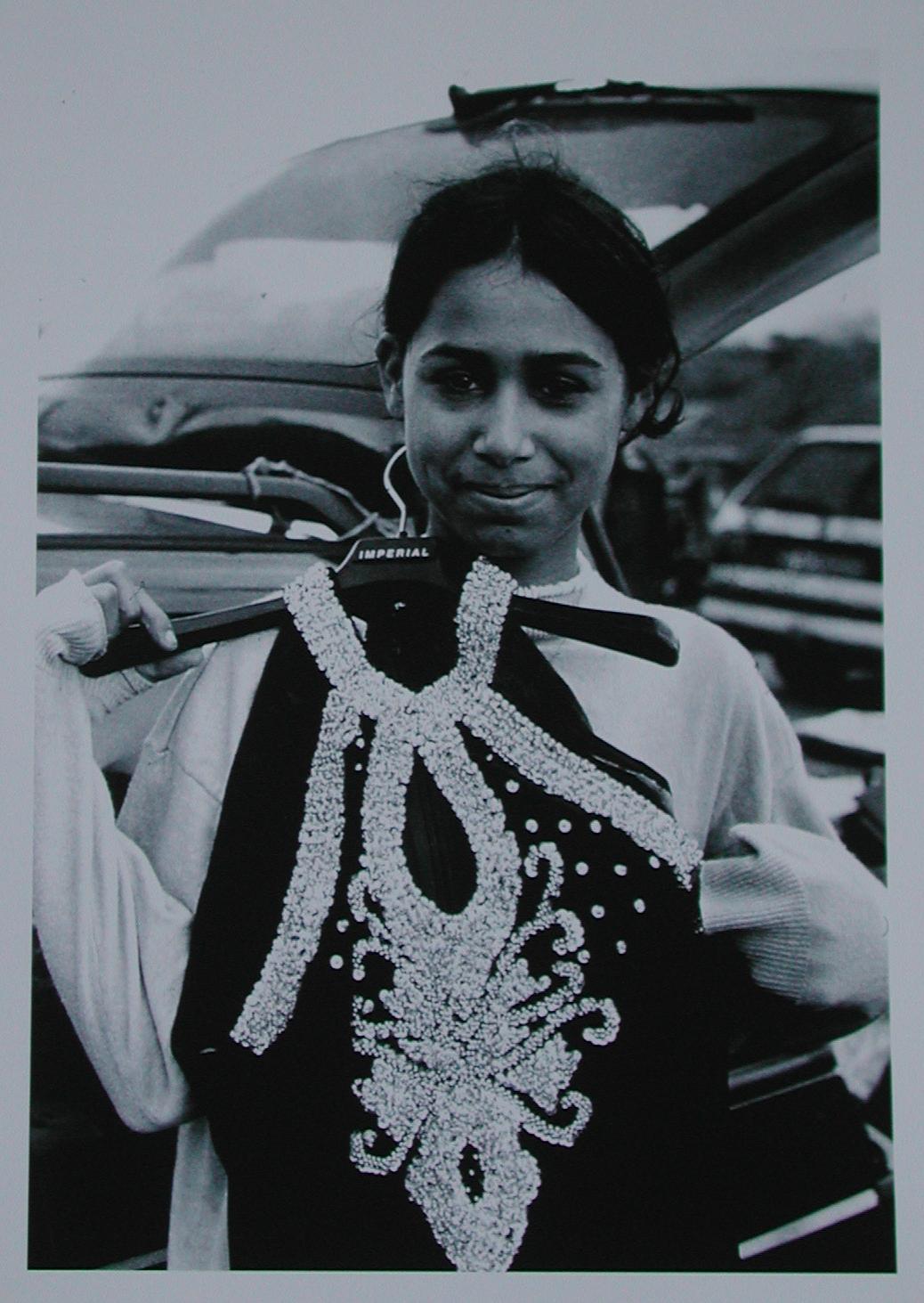 And then my Rom friends from Romania, two sisters and a sister-in-law, came to see this exhibition in the library where I have taught parents how to sign their names so their babies can be returned to them rather than be put up for adoption if born in Italian hospitals. (This is a form of genocide.) 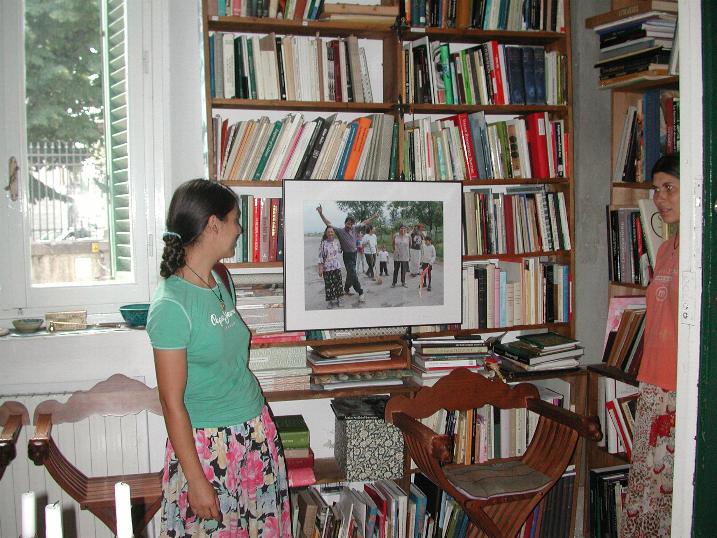 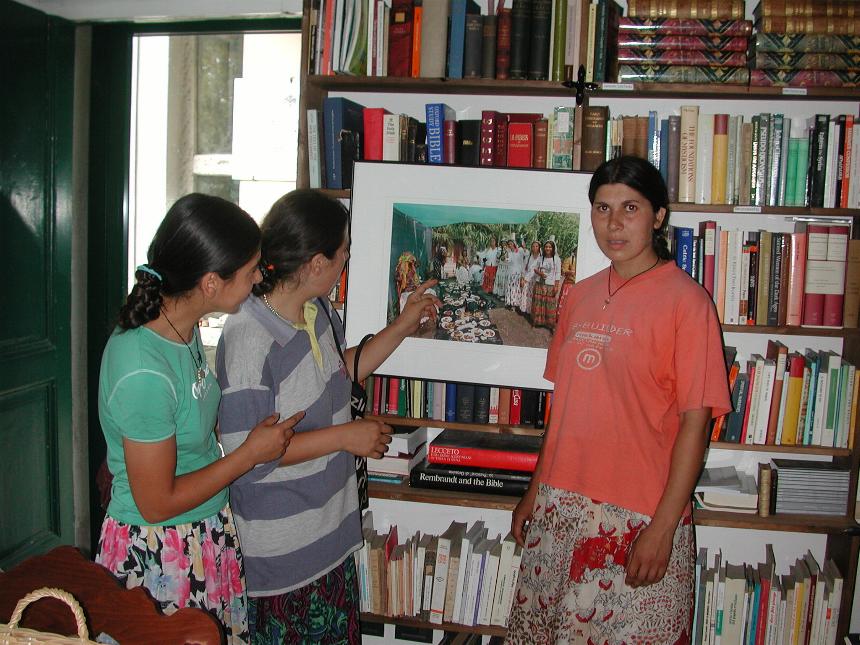 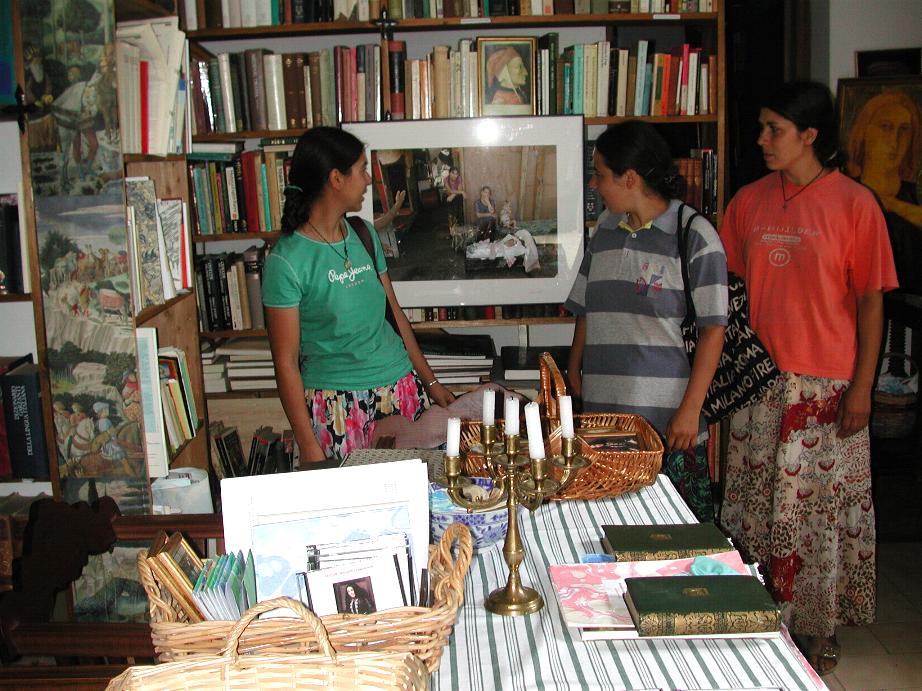 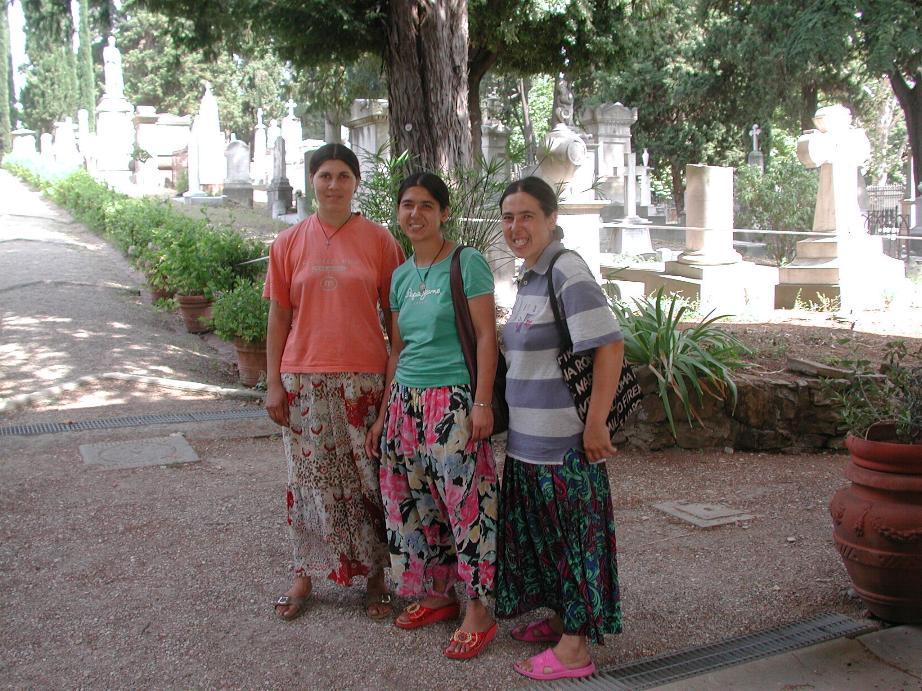