e made a pilgrimage to Assisi and to Rome this Jubilee, taking the train from Florence to Santa Maria degli Angeli and its Porziuncola, spending the night there, catching the first bus into Assisi and in the dawning light walking down pilgrim stairs to San Damiano. 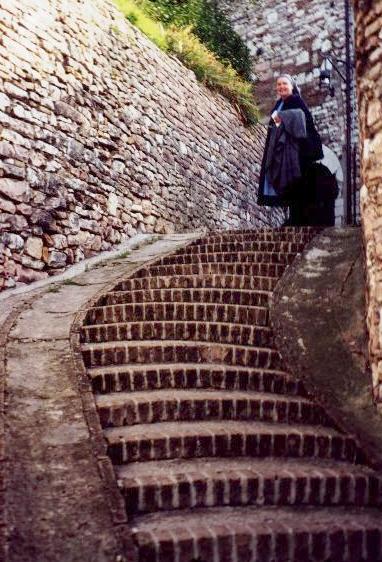 This is where St Francis had heard and seen the Cross speak to him, 'Francis, repair my church. It is all falling in ruins'. Francis first repaired San Damiano, then realized he was meant to repair the entire Church of Christendom. He later gave San Damiano to Clare and her 'ladies' wed to Holy Poverty. 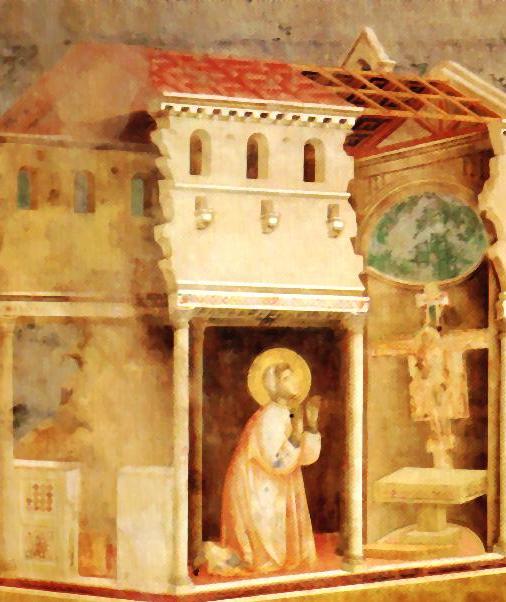 St Francis began our practice of placing the Child in the Manger at Christmas at Greccio in 1223. Carmo and I could not travel there. But I had gone many years ago, with my children when they were small, our delighting in the birds singing in cages against the cliff. When Giotto painted this scene he did not give it in the cramped Greccio chapel but as if taking place in the Assisi Basilica within which this scene is painted. 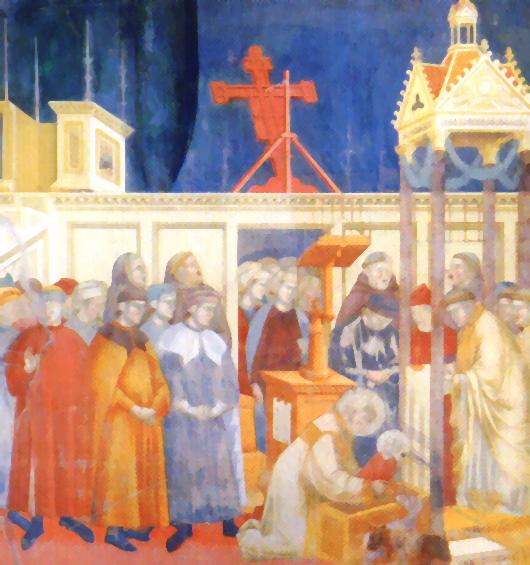 Nor would Carmo and I go to Mount Alverna, the place of St Francis's stigmatization, a similar place of great cliffs above valleys.

Francis and Clare had been rich, privileged young people. Francis, the merchant's son, stripping off his rich clothing in front of the Bishop of Assisi and being clothed in the episcopal cope, though he never became more than mere deacon, never sought the priesthood. That cathedral is San Rufino, and beside it Clare was born and lived as a child. 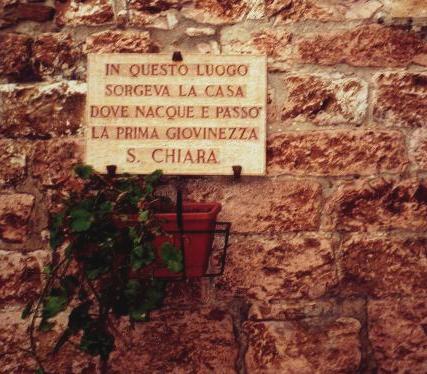 Above its great door, fitting to this Jubilee year, sculpted in Assisi's pink stone, is the Woman Clothed with the Sun, nursing her Child, escaping from the great Beast, beside God enthroned between the Moon and the Sun, and then St John writing the Book of his Vision of the Apocalypse. 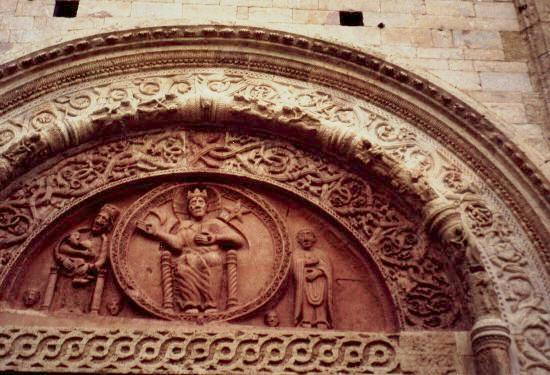 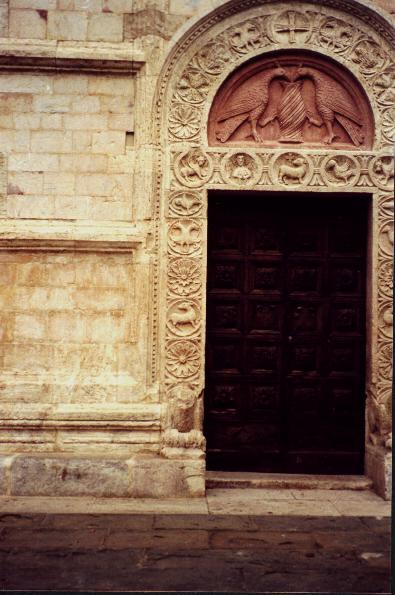 The Romanesque art of Assisi runs riot in its cathedral with similar forms to those we see in Assisi's cross-stitch embroidery of blue on white,

of griffins and lions and peacocks, and in the hand-loomed cloth of Farfa Sabina, glimpsed in the altar cloth above of the Greccio miracle, motives which go back to ancient Babylon, repeated down the centuries in a women's literacy. 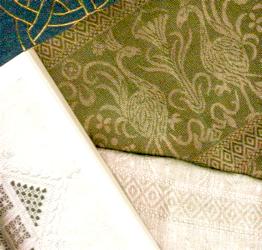 It was first to San Damiano, and then to the church which became Santa Chiara, that St Francis' body was brought from the Porziuncola. 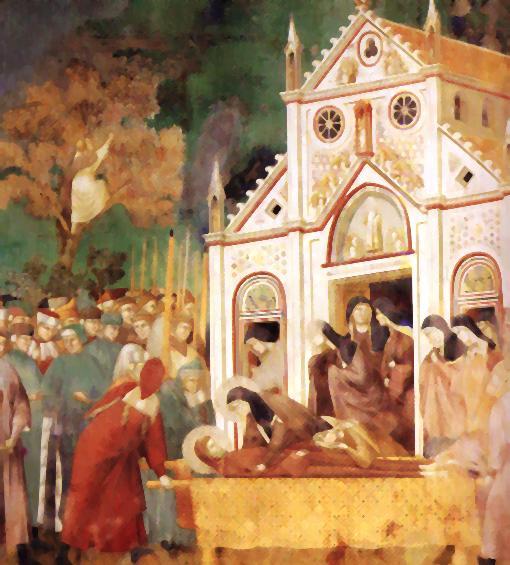 After Clare's death her body too was brought to Santa Chiara and her ladies moved there, preserving St Francis' charism far better than did Fra Elia, building his vast Basilica from amassed shekels, to which St Francis' body was then taken. Franciscans split into two, the Conventuals in their black robes, the Spirituals in their brown, the Conventuals having the physical heritage, the body of the saint, the Spirituals, the spiritual heritage, of humility, of poverty. 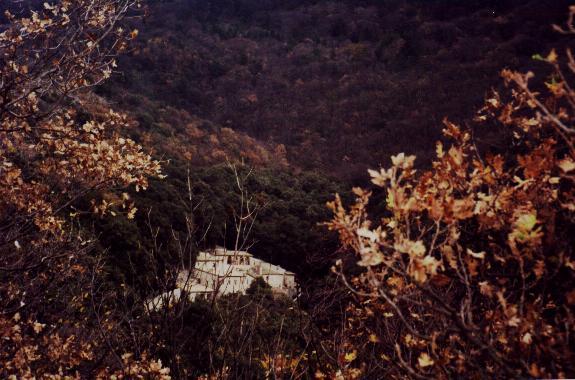 But during Francis' lifetime was always the desire, like Christ's, to renew himself in prayer through removing himself from the world, an especial retreat of his being the Eremo dei Carceri in the mountains above Assisi. It was here St Francis preached to the birds. Here we saw white doves amidst Autumn foliage.

Arnolfo da Cambio, Sculpture in the Cloister, the Lateran Basilica

St Francis sought the approval of his Rule, based on the Gospel, on Poverty, Chastity and Obedience, the three knots to the girdle of rope, from the Pope in Rome, then at the Lateran, not the Vatican. Above we see the wealth of the Lateran, an ecclesiastical procession of censor bearer, incense boat bearer, mitre bearer, and lector with acolyte holding his lectionary, against a rich background of gold and coloured mosaic. We too on our pilgrimage came to Rome, first St Peters, but the crowds were too great, then the Lateran, whose Holy Door is the original Holy Door, later copied at the Vatican, and there made our confessions to Franciscans and passed through it.

St Francis' Rule was not acceptable at first to the Pope. It had to be rewritten again and again, stripped of the Gospel, made legalistic. Clare preserved the original for her ladies. The Conventuals omit Clare from their documents about Francis. The Pope dreamed of Francis holding up the great Basilica of the Lateran from toppling in  an earthquake, so finally granted him the much-altered Rule. 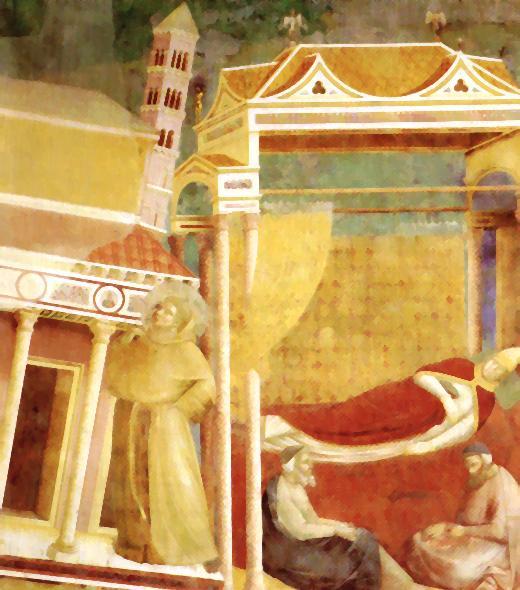 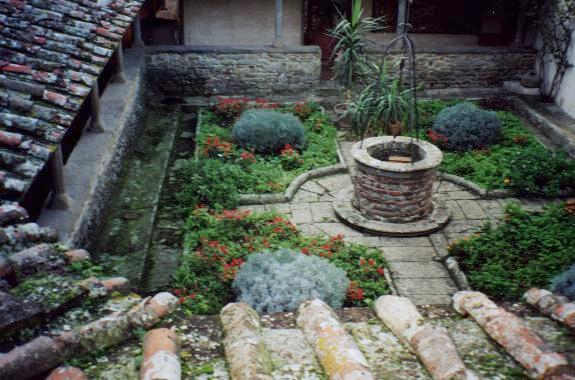 Meanwhile Francis' message of peace went out into the whole world, cloister upon cloister for prayer, symbolizing Paradise, being built in the midst of cities, or even founding cities, among them San Francisco, Franciscans journeying to the Orient, to the Americas, to far California, to far China. Here such a Paradise is found in Fiesole.

This morning, in March 2004, I walked into Annibale Niccolai's shop here in Florence to ask the prices of the wooden carved St Francis and Wolf low down in the window, and then to photograph them where he placed them on a table in front of one of his paintings. Annibale never repeats himself, each piece being unique. Once I remember an antiquarian had in his shop window nearby a great Baroque piece of a woman saint in ecstasy, her nuns' garments swirling about her in clouds, and I so yearned to purchase the version Niccolai made of it, that exactly copied its style, its atmosphere, in miniature. He both carves and paints. His address is Piazza Pitti, 20red, telephone and Fax 0039 055 283116, annibaleniccolai@katamail.com 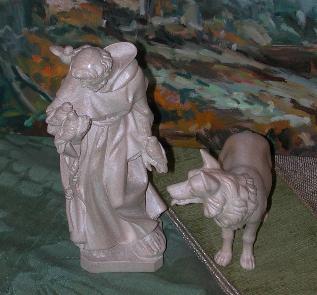 I first photographed them from above, loving Francis' humility. 'No', Annibale Niccolai said, I had to sit down and take another. 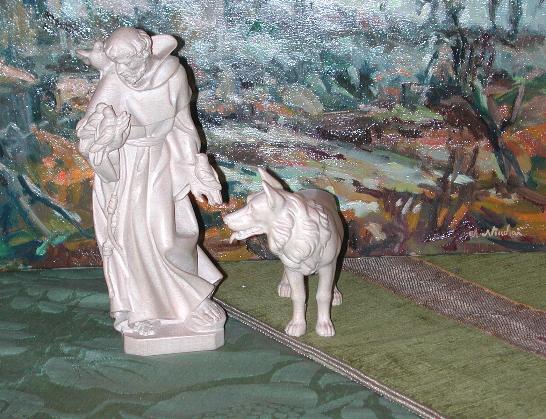 Go to the Rule of St Clare

Go to the Privilege of Poverty