JULIAN OF NORWICH, HER SHOWING OF LOVE AND ITS CONTEXTS ©1997-2019 JULIA BOLTON HOLLOWAY  || JULIAN OF NORWICH  || SHOWING OF LOVE || HER TEXTS || HER SELF || ABOUT HER TEXTS || BEFORE JULIAN || HER CONTEMPORARIES || AFTER JULIAN || JULIAN IN OUR TIME ||  ST BIRGITTA OF SWEDEN  ||  BIBLE AND WOMEN || EQUALLY IN GOD'S IMAGE  || MIRROR OF SAINTS || BENEDICTINISM || THE CLOISTER || ITS SCRIPTORIUM  || AMHERST MANUSCRIPT || PRAYER || CATALOGUE AND PORTFOLIO (HANDCRAFTS, BOOKS ) || BOOK REVIEWS || BIBLIOGRAPHY || Terence through Time Website, E-Book.

THE COMEDIES, THE CANTERBURY TALES, THE ELLESMERE MANUSCRIPT AND THE LUTTRELL PSALTER

he following tables, with the ladies first, present the thesis of the influence of Terence upon Chaucer. It should be noted that Terence, the freed African associated with the Scipios in Rome, who had lived in the second century before Christ, wrote such pure Latin that his Comedies were used throughout Europe in the Middle Ages and the Renaissance to teach that language in monasteries, convents, schools. These manuscripts were often lavishly illuminated, giving rise to later printed books with woodblocks for every scene. England possessed one such, once owned by St Albans Abbey and now in the Bodleian Library, Ms. Auct. F.2.13 (c. 1150). It is one of the thirteen illustrated manuscripts that have survived for us from before 1300, these typically giving the actors' masks on their rack, then often illustrating the plays' scenes. Later than Chaucer would be a flurry of fine illuminated Terence, Comedies, in Paris, often to educate the King of France's sons. 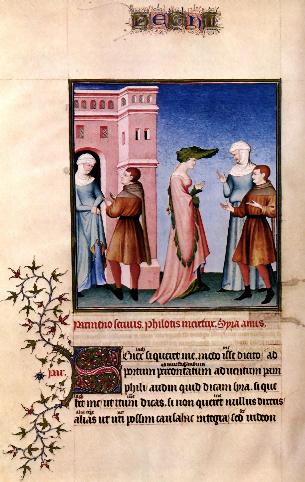 The frontispieces to the manuscripts in the Bibliothèque Nationale and the Bibliothèque de l'Arsenal in Paris, which are influenced by the earlier Terence manuscripts, and which would in turn influence the printed editions of Terence, show how the Roman theatre was understood, with the author, Terence, presenting his work to his patron, while his impresario, Calliopus, within the round 'Populus Romanus Teatrum', directs the masked actors in the plays. Chaucer's Cambridge Corpus Christi College Troilus and Criseyde will reflect these conventions. 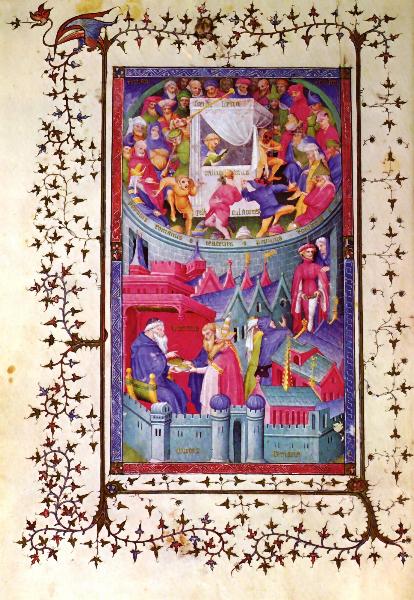 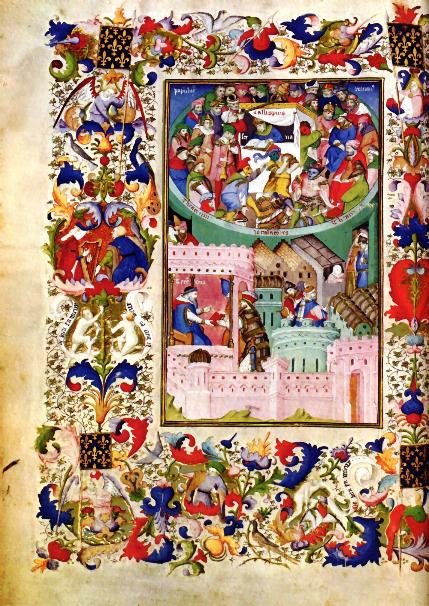 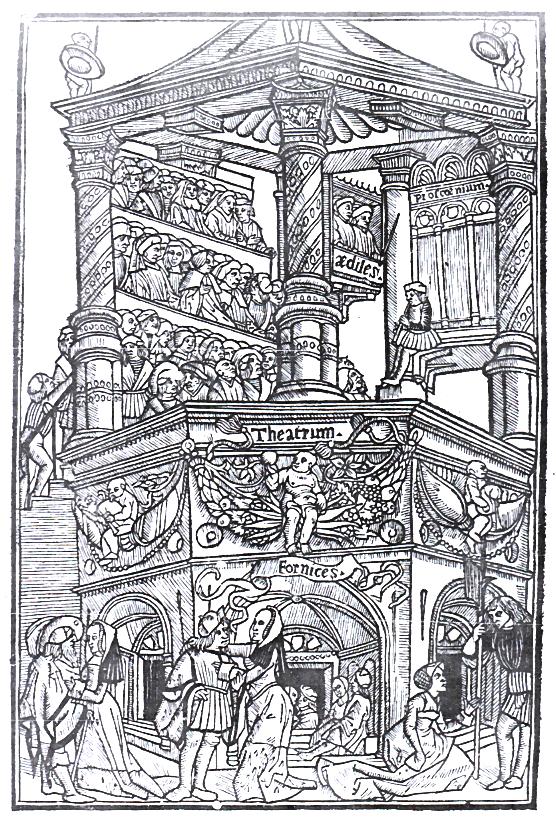 Boccaccio translated all of Terence (that manuscript today is in the Laurentian Library in Florence) and wrote the Decameron. Chaucer takes up the frame tale of tales being told, marshalling his pilgrims together in a flock, not by the Parson, but by Harry Bailly, the innkeeper of the Tabard, and includes himself amongst their number on the journey to Canterbury. He begins with a General Prologue describing each pilgrim tale-teller. The General Prologue, and especially so in the illuminated Ellesmere Manuscript, functions like the Masks upon the Rack, so typical of early illustrated Terence manuscripts. 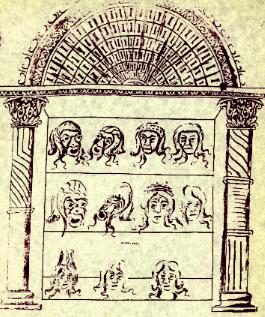 The Table below gives the correspondences between Terence's characters and Chaucer's.

In this arranging Chaucer seems to have adapted those of the classical Latin drama to the divisions of his Christian culture which kept aside God's servants in sexual abstinence, as if eunuchs, and which divided society into the Three Estates of Ploughman, Knight and Monk, likewise presented in the General Prologue. The General Prologue presents Chaucer's characters, the story tellers of the Canterbury Tales, like so many masks upon a rack. The Ellesmere Manuscript of the Canterbury Tales and the Luttrell Psalter are both exquisite - except for the comic faces and distorted bodies of some of their characters. Then one realizes that both illuminators, and also Chaucer himself, were familiar with Terence's Comedies, in which this is the tradition. Terence, as much as Aristotle, gave early European culture a mirror in which to view itself, albeit at times a cruel funhouse distorting one, a writer's desk with pigeonholes, a set of mocking masks to don. 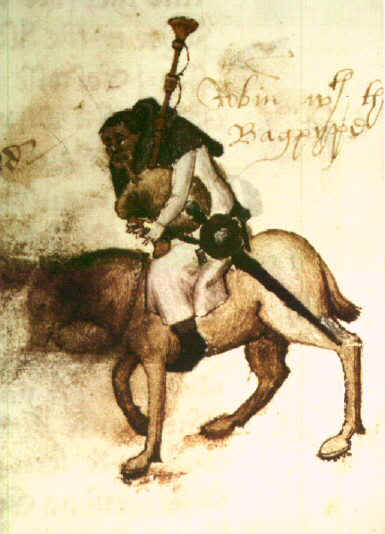 Millard Meiss. French Painting in the Time of Jean De Berry: The Limbourgs and Their Contemporaries. New York: George Braziller, 1982.

My name is Bryn Roberts and I’m contacting you on behalf of the British Library. I noticed recently that you have a mention of Chaucer’s Canterbury Tales on the following page: http://www.umilta.net/terencechaucer.html This late 14th Century text has been in our possession (initially as part of a library that would become The British Library) since 1741 and we have now made it available for all to browse on our website: http://www.bl.uk/collection-items/the-canterbury-tales-by-geoffrey-chaucer The manuscript is unique and sadly can no longer be handled by the public without special permission. Viewing the document electronically is now the most viable approach for those interested in it, and we have made it available to all via our website. We would be very grateful if you could include a link to it in your article so your readers can access the original version and discover the text for themselves.

This is a quasi-chapter from the E-Book: Latin with Laughter: Terence through Time