JULIAN OF NORWICH, SHOWING OF LOVE

have now, in my retirement, studied the lives and writings of three women, all of whom included theology in their works, Birgitta of Sweden, Julian of Norwich, Elizabeth Barrett Browning. All three had access to Hebrew and I found in order to edit their writings that I, too, needed to learn Hebrew. In the process of editing their writings, I also drew up time lines, tracing not only their texts but also their contexts: those who came before them, influencing them, giving them models; those who were their contemporaries, colleagues and friends; and those who came after them, preserving their texts, using them as models. (Other such time lines, compiled from the papers at 'The City and the Book' international conferences in Florence, may be found at http://www.florin.ms/spacetime.html and http://www.florin.ms/gimelf.html.) For time is like a river into which streams flow and which becomes an ocean. One goes ever forward, not backward. And the sequence of books written in time by authors who have read other authors and who will be read by further authors is also not unlike the genealogies of human families as mirrored in the shelves of libraries. Again, going ever forward and not backward. In this timeline I study what texts were in what manuscripts, for instance that library of texts that is the Amherst Manuscript, and who owned them, to trace these influences, even to the extent of giving the evidence for the much-travelling between Norwich and Oxford, Norwich and Italy, Norwich and Flanders, of Cardinal Adam Easton's magnificent library of theological books. One can play games with this list, for instance searching 'Cambrai', 'Lowe', 'Stapleton', 'Bramston', down the centuries. These writers, men and women, similarly became my inspiration and model as a writer, as a scholar, as a contemplative.

I learned from travelling in Europe from library to library exploring manuscripts that Japanese scholars on trains doing the same found it necessary in studying a culture other than their own to organise their research according to time, as above, and to space, as below, where I give a map of the pilgrimages women, including myself, made across Europe and beyond, and a map of Julian's Norwich:

Helena and Paula from Rome, Egeria from Spain, Guthrithyr from Iceland, Birgitta from Sweden, Margaret and Margery from England , on Pilgrimage to the Holy Places. 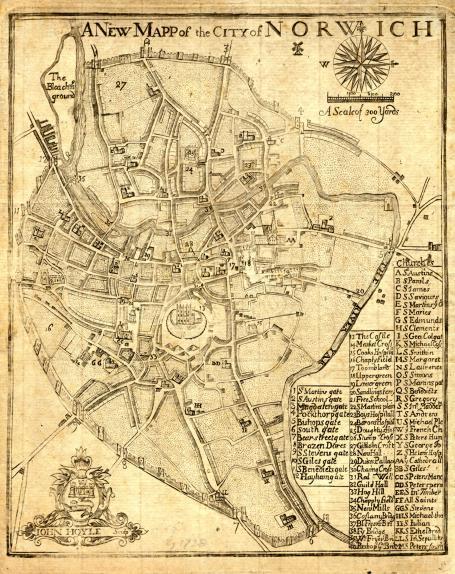 
JULIAN OF NORWICH, HER SHOWING OF LOVE AND ITS CONTEXTS ©1997-2019 JULIA BOLTON HOLLOWAY  || JULIAN OF NORWICH  || SHOWING OF LOVE || HER TEXTS || HER SELF || ABOUT HER TEXTS || BEFORE JULIAN || HER CONTEMPORARIES || AFTER JULIAN || JULIAN IN OUR TIME ||  ST BIRGITTA OF SWEDEN  ||  BIBLE AND WOMEN || EQUALLY IN GOD'S IMAGE  || MIRROR OF SAINTS || BENEDICTINISM || THE CLOISTER || ITS SCRIPTORIUM  || AMHERST MANUSCRIPT || PRAYER || CATALOGUE AND PORTFOLIO (HANDCRAFTS, BOOKS ) || BOOK REVIEWS || BIBLIOGRAPHY