THE JOY OF HEBREW


I give you the end of a golden string.
Only wind it into a ball.
It will lead you into Heaven`s gate,
built in Jerusalem`s wall.
William Blake

he relation of women and the Bible has been made difficult by the control over the sacred text for centuries by men who had the privileged language while women and children did not. But we shall find in this book that the initial study of the Torah was the work of a woman, Huldah, and that the translation of the Hebrew and the Greek into Latin was carried out with the money and with the study of Paula and Eustochium her daughter who were both the patrons and the secretaries of the project in Bethlehem where Jerome translated the Vulgate Bible. We shall find that later women with the knowledge of Hebrew likewise advanced theology, among them Birgitta of Sweden, Julian of Norwich, Elizabeth Barrett Browning and Edith Stein, while Teresa of Avila was such a conversa as was Edith Stein, and the tragically young Thérèse of Liesieux stated that priests should study the Bible's original languages. For Hebrew is an ancient computer system for recording spoken words, a technology of memory, sharing as does Wisdom, God's Daughter, in the very creating of the cosmos it describes.

In Elizabeth Barrett Browning`s Aurora Leigh is the description of the child Aurora coming across crates upon crates of her father`s books in attics in her aunt`s house, which she devours. I had gone to an Oxford Movement Anglican convent school from six to sixteen, taught by nuns who knew Hebrew and Greek. Holmhurst St Mary was a Paradise. At six I was taught by Sister Veronica in a room our Mother Foundress, Agnes Mason, C.H.F., called `Utopia`, in a house designed by Augustus Hare from the proceeds of his travel books, Utopia having blue green William Morris wallpaper, where we sat on carved oak window seats from Bayard Castle, looking out onto an Italian Renaissance terrace and the ample landscaped grounds, the sea beyond. At fifty-five I returned to be a sister there, becoming the convent`s librarian and teaching myself Hebrew from attics of books, already having Latin and Greek. The present sisters no longer studied the sacred languages and the books for many years had languished in tea crates, unused, the cover of a first edition Richard Hooker broken off as it was shoved in.

Learning Hebrew I found was of the greatest use in editing Birgitta of Sweden, Julian of Norwich and Elizabeth Barrett Browning for they knew and used that sacred language in their theology and poetry. Particularly entrancing was finding that Hebrew is easy! Much easier than Greek. And finding that Greek writing owes its existence to Phoenician Semitic Hebraic writing. Hebrew is a concrete language, with an alphabet where every letter is also a thing and as well a number. It has a small vocabulary but one which is rooted in actuality. The words describing God are words making full use of our human body parts, God created in our image, we in his.

Jesus says that to enter the Kingdom of God we must become as children. The same is true with the study of the world that is Hebrew. Not for nothing are children`s building blocks often inscribed with the letters of the alphabet. This is how a child discovers that words are created from sounds and that they are formed of syllables. Just as God creates the world with his Word, so do we build a world of words mirroring God`s Creation with letters and syllables. In my convent`s attics I found that my learned Mother Foundress had bought Hebrew books for teaching children their language. And that in five lessons they were reading Genesis!

Sacred Hebrew has consonants. Later, vowels would be included as pointing to these consonants, not as letters in themselves. One of the books I found in my convent was Spinoza on Hebrew philology, where he says that consonants are the skeletal bones of words, vowels their souls. In relation to our writing, Hebrew seems to go backwards. Originally, our alphabet family went from right to left. Hebrew books and scrolls, relative to ours, go from the end to the beginning, from the last page to the first.

I suggest you photocopy the next page keeping it in this book as a book-mark, using it to learn the Hebrew alphabet and to puzzle out its words in Hebrew. As in Greek, some letters in Hebrew are shaped differently when they are at the end of a word. These will be the second letter given in this sequence.
These are the letters:

Now Arabic is similar to Hebrew, its letters mostly having the same names. With one notable exception. The Arabic of the Koran is written with vowels as well as consonants. Consequently Islam, from this technological superiority, advanced rapidly in areas even where Arabic was not the mother tongue. Judaism, witnessing this competition and needing to supply the Torah to the non-Hebrew-speaking Kharzar converts, pointed the text to indicate the vowels. These Masoretic texts were a stepping stone to the reading of the Torah scrolls which remain un-pointed and un-vocalised.

In my convent I created a schema that helped me understand the pointing, the vocalizing of Hebrew. These vowels have three forms, long, short, and shortest or shewa, these points below, within or above the consonant representing the sound following it.

Again, it is advisable to have this chart on a card and to keep it at hand while reading Hebrew.

Besides the vocalization by means of pointing, Masoretic Hebrew is also written with accents and with cantillation, the latter especially to use when chanting the Psalms, all of these to assist in presenting the sacred text aloud.

It would now be possible to take up an interlinear Bible and to read these words with their correct pointing, continuing further with this text: 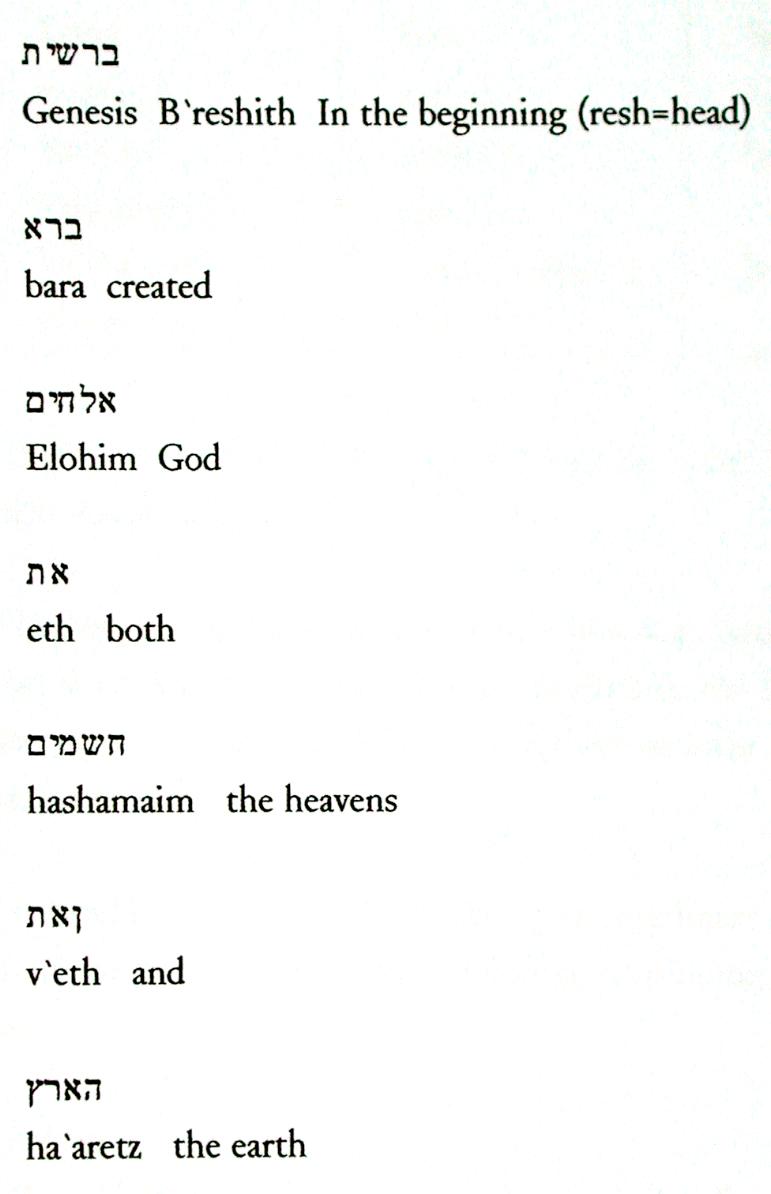 In the fourteenth century St Birgitta was to be taught this opening to Genesis by Magister Mathias (who had studied Hebrew in Paris under the Jewish convert Nicholas of Lyra) and who translated the Bible into Swedish for her. She would open her Revelationes with this passage, the act of writing as the act of creating. Before her had been Paula and Jerome, following her would be Julian and Margery, the first of Norwich, the second of nearby Lynn, all of these women, apart from Julian, coming to the cave in Bethlehem to the place where the Vulgate, carried out by Jerome, Paula and Eustochium, translated those words in Latin.

Then, in Julian of Norwich's Showing of Love we find her praying the prayer a Jewish mother first teaches her child, that Mary taught Jesus, that we place ourselves in God's hands which are tender and loving like those of a mother.

Jesus would have also heard his mother pray the prayer of the blessing of the Sabbath lights, then Joseph, that of blessing bread and wine of the Sabbath.

Also, we find Julian using again and again the Shema, that Jesus taught in Mark, 'Hear, O Israel, the Lord is our God, the Lord is One', a prayer that makes Jews, Christians and Muslims worship the one God, and, doing so, be one. 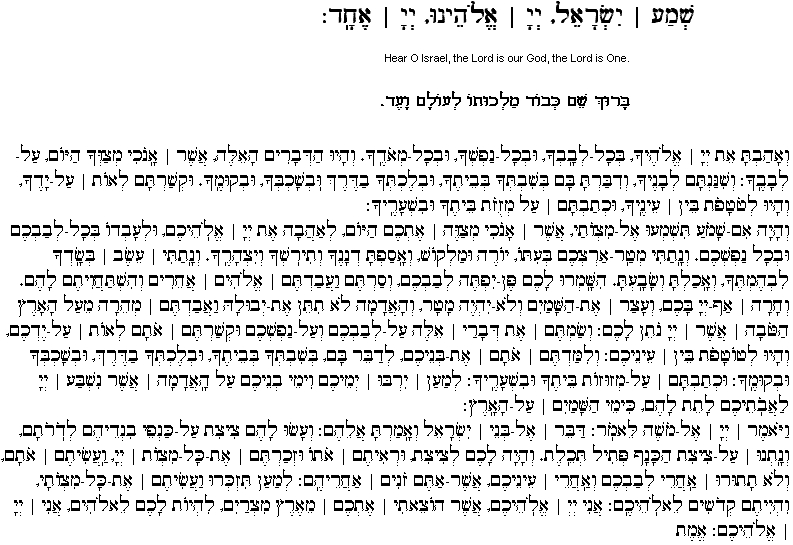 Or more briefly, the version an infant is taught, the version given at the end of the Hebrew prayer book, which is our beginning of the book:

This is a chapter from an E-Book in progress, Miriam and Aaron: The Bible and Women.